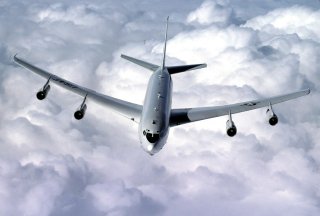 The Cold War has been over for more than thirty years, but some Cold War-era spy planes are being used again for their original purpose in response to Russia’s invasion of Ukraine.

According to Defense One, the E-8C Joint Surveillance Target Attack Radar System (JSTARS) is being used for “tracking Russian forces as they invade Eastern Europe,” which is exactly what it was built for.

“It was designed in response to the Soviet threat in Eastern Europe, almost exactly what's happening right now,” an Air Force official told Defense One.

Defense Blog had reported in December that the planes were spotted over Ukraine.

The system consists of converted Boeing 707 airliners, which are jointly operated by the U.S. Army and Air Force, and it was used in the Gulf War, and later Iraq and Afghanistan. The first E-8C was retired by the Air Force earlier this year.

“The first retirement of a JSTARS aircraft gives us an opportunity to celebrate the operational accomplishments and the pivotal role the aircraft has played since the first one came to Robins in 1996,” Col. Amy Holbeck, 116th Air Control Wing commander, said earlier this week, per an announcement by Wright-Patterson Air Force Base.

Per Defense One, Air Force officials are hoping to replace the retired plane with the Advanced Battle Management System (ABMS.)

Earlier this month, RealClearDefense proposed that the Air Force should buy the E-7 Wedgetail, as a “step on the path” to ABMS. The piece, authored by Dan Gouré of the Lexington Institute, compared the original vision of ABMS to “the One Ring from the Lord of the Rings saga, which had the power to find, bring, bind, and rule all other rings.” But, the author noted that the Air Force has had trouble controlling and defining what ABMS is.

“A low-risk, real capability that could replace the E-3 in the near term is the E-7 Wedgetail, which is based on the widely operated Boeing 737 airframe with an advanced electronically steered radar array,” the RealClearDefense story said. “As previously noted, the British Royal Airforce is acquiring the E-7 as a replacement for its E-3 AWACS. Australia has operated the Wedgetail since 2012. NATO planners have proposed replacing the Alliance’s E-3s with the E-7. Controlling a fleet of UASs equipped with advanced sensors, the E-7 could provide a potent C2/BM capability.” It added that the U.S. Air Force has signed a sole-source contract with Boeing to “conduct a series of studies and analyses that would assess the E-7 baseline configuration.”