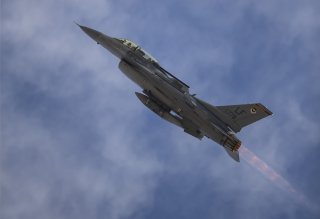 American F-16 Fighting Falcons flew from Germany to Poland on a long-planned deployment earlier this month.

The U.S. Air Force fighters have been scheduled to operate with Belgian and Polish fighters in the region for several months, but the exercises may take on greater significance in light of Russia’s military buildup along the Ukrainian border.

The aims of the exercise are multi-faceted. The operations will improve interoperability among partner nations while also enhancing command and control protocols. NATO and the US are moving quickly to demonstrate readiness.

A key concept with the exercise is to refine and improve “enhanced air policing” that relies heavily on secure networking and data sharing with allied forces. The mission will focus on the Baltic region.

While the exercise has been planned for quite some time, the presence in Baltic region fortifies NATO’s deterrence posture.

The F-16s were likely communicating with Link 16 and also assessing the ability of aircraft to land in new areas at allied bases to reinforce operations, strengthen partnerships, and also demonstrate the ability to maneuver and deploy fighter aircraft over high-value areas near Russia’s border.