American Hypersonic Weapons Are Coming Sooner Than You Think 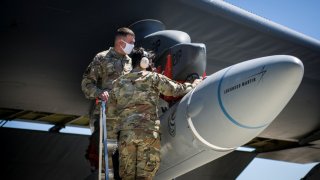 The United States, along with other countries around the world, is working on hypersonic weapons. And while there have been some setbacks when it comes to hypersonic technology, a new statement from a top official indicates that the weapons are almost ready.

According to Air Force Magazine, Gillian Bussey, director of the Department of Defense’s Joint Hypersonics Transition Office, said at a conference this week that the first battle-ready U.S. hypersonic weapon will arrive “within a year or two” from the Army, with the Navy not far behind.

“The only thing that’s missing is the missile,” Bussey said while speaking at the American Institute of Aeronautics and Astronautics Ascend space technology conference. “We’re looking at having that fielded in the next year or two,” she said of the fruits of the Army’s Long Range Hypersonic Weapon (LRHW) program.

The Air Force, however, “has yet to stage a successful all-up test of the AGM-183 Air-launched Rapid Response Weapon (ARRW), the service’s own boost-glide system,” the director of the office said.

Joint Hypersonics Transition Office was been around since 2019, in order to bring the different branches’ hypersonic efforts together. Bussey, per Air Force Magazine, said that Congress was “concerned that across the department, there were too many disparate efforts. We weren’t really getting the efficiency out of the dollars that we were spending, that technologies weren’t transitioning, so they really charged us with focusing on transition and jointness.”

The technology, she said, is in Phase 1 of the four phases, although it is approaching Phase 2, which entails prototyping.

“We think we’re well on track to having a program of record with some of those systems [that we’re prototyping],” Bussey said in the speech, per Air Force magazine. “And that’s where you get to this point, the significant quantities that we need to really make a difference on the battlefield.”

The report also said that the Pentagon asked for $3.8 billion for hypersonics research in its 2022 budget request, up from $3.2 billion the year before.

“Ten years ago, the government was considering closing wind tunnels, and academic researchers avoided mentioning hypersonics in their proposals in order to secure funding. Today, many wind tunnels, including some of those slated for decommissioning, are booked solid for years,” Bussey said last month, per National Defense Magazine.

Hypersonic missiles are seen as a valuable technology because they move so fast that it is very difficult to intercept them. Many other countries, including China and Russia, are working on versions of hypersonic technology as well, and even Japan is reportedly interested in the technology.

North Korea claimed last month to have launched a hypersonic missile of its own, although some experts have questioned whether the missile actually moved fast enough to meet the definition of hypersonic.