An American Went to Help Hong Kong's Protestors. This Is What He Saw. 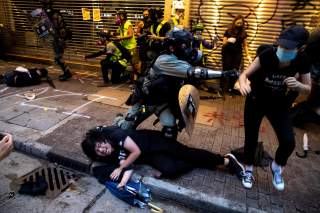 Since early November, Cody Howdeshell has been in Hong Kong, delivering first aid to protesters. He’s seen some of the violence firsthand: Hong Kong police, he says of one incident, “went in and they beat these kids that were already half dead with their nightsticks and began to absolutely tear them out with no mercy, probably dislocating limbs, and shoved them against the wall and arrested them.”

Howdeshell joins the podcast to share why the protesters want freedom, what he thinks will happen in the long term, and what he believes Americans should learn from Hong Kong’s experience.

“Nothing in communism is voluntary, and it has to be enforced with violence at the end of the day against those that would preserve their own freedom and liberty,” Howdeshell says.

Read the lightly edited transcript below or listen to the podcast:

We also cover these stories:

The Daily Signal podcast is available on Ricochet,iTunes, Pippa, Google Play, or Stitcher. All of our podcasts can be found at DailySignal.com/podcasts. If you like what you hear, please leave a review. You can also leave us a message at 202-608-6205 or write us at [email protected]. Enjoy the show!

Rachel del Guidice: We’re joined today on The Daily Signal Podcast by Cody Howdeshell, a merchant seaman from North Carolina who is in Hong Kong right now providing emergency first aid to the Hong Kong freedom fighters. Cody, thank you so much for making time to be with us today.

Cody Howdeshell: Thank you for having me.

del Guidice: So right now you’re on the ground in Hong Kong helping the freedom of fighters, giving them emergency first aid. Can you set the scene for us and tell us what you’ve been witnessing day-to-day?

Howdeshell: When we first arrived—we arrived on Nov. 1—You could walk around the streets during the day and you would think this was just a normal city. The protests typically happened Friday, Saturday, and Sunday nights, and during daylight hours it was business as usual.

It was almost surreal walking out in the morning and seeing everything going on as if nothing had happened the night before. When the night before, you had seen tons of rounds of tear gas fired and pepper spray and had violent clashes between police and protesters. And even then the violence wasn’t quite as high as its become now.

I mean, it would’ve been nice if things have deescalated, but we’re also concerned because we’d come here to help [with hope] that things might deescalate in the first week and we would’ve come for nothing.

But in the last nine or 10 days with the universities being placed under siege and fortifying themselves and all the students joining in the fight more so than ever before, we’ve seen the violence escalate and the clashes occur a lot more regularly to the point where it’s been 24 hours a day, seven days a week.

Yesterday evening, last night was the first night I’ve had off in probably about 10 days. Tonight seems quiet, as well. I think everyone is just burned out and the protesters are having a bit of a break. …

During the past 10 days or so when it was really at its peak, walking down the street, you would typically pass one area where the protesters were building their roadblocks. They tear the bricks up from the cobblestone sidewalks or the paving bricks and throw them in the road and stack them in the road.

They’ve actually been using mortar and building proper walls. They use bamboo scaffolding and anything they can get from construction sites.

There’s certain protocols that the police have to follow. So they raise a blue flag that says, “This is an illegal assembly and you must disperse,” and nobody does. So then they raise a flag … it’s black and says, “We’re going to fire tear gas.” Nobody leaves. So they fire tear gas.

And then they can raise an orange flag saying, “We will disperse or we will fire.” And when they say they will fire, they mean rubber bullets and sponge rounds and bean bag rounds. They don’t mean actual live rounds usually.

So then on through the night that goes on where the protesters and the police faceoff, rounds are exchanged. The protesters throw bricks, they throw Molotovs, they’ve been seen building trebuchets, catapults, slingshots. And the police returned fire with tear gas and rubber bullets.

And they usually [go] back and forth, you know, the protesters gain some ground, the police gain some ground. And the usual ending is a high-speed charge by the riot police firing tear gas as they go.

But these guys are weighed down with a lot of gear and they’re all in their 30s or so. And you’ve got a bunch of students in tracksuits that are in … the prime of their lives.

So a lot of them are 16, 17, 18, 19, and they’d take off in high speed like rabbits. They obey the police and then they regroup about an hour later and it happens again. Eventually, everybody goes home and sleeps a little bit.

del Guidice: So there are multiple cycles of … activity it sounds like per night when there’s a protest happening?

Howdeshell: Yeah. It was definitely sort of to poke and prod the police and antagonize them and then withdraw. And then to do it again and withdraw.

So what you saw was a vast amount of the population keeping the police busy in the streets while the university students had the opportunity to fortify their universities. And when those battles happened—as we saw last Tuesday at the Chinese University of Hong Kong and as is going on right now and coming to a close at Poly University, Polytechnic University—those battles are extremely long, drawn out, and extremely violent with a very high number of casualties.

Do you think the protest will end at any point? And since [proteters’] main demand was met, what do you think now is the primary driver of the protests continuing?

Howdeshell: I don’t think that the extradition bill, once it got going, remained their main demand. It started that way. But I think once the people realized the power they had and the ability they had to organize and come out all nice and actually … well, to use a phrase that I’m not always a fan of, but speaking truth to power.

Once they realized that they said, “As long as we’re doing this, we really ought to be demanding what we fully deserve,” and what was, as far as I understand, promised to them when Britain withdrew. And that was that they would also have universal suffrage.

So at this time a large part of the house of legislature here in Hong Kong is not actually elected by the people, democratically elected. It’s appointed by these councils. …

These five demands these protesters have, one, is the extradition bill being withdrawn, which has now been done. And the second biggest one, I think, and opinions may vary on this, but would be universal suffrage, meaning they have a fully democratic governing system where they elect all their members of this legislature.

How will it end? I don’t know. It would be a massive concession on China’s part to allow them to have a fully democratic government. …

The other demand that really the government could give into, for instance, [is having] a private investigation of the police force and police brutality, which so far has not been done.

Also, one of the demands was that the government no longer referred to the protest as riots, but as protests, which has sort of been done.

Though, pardon me, to be fair, at this point, I don’t call it protest myself. This is insurgency. When you’re watching young kids in colleges fire flaming bows and arrows at police officers and Molotov cocktails—there’s rumors of IEDs—being made, that’s not a protest. It is a revolution for freedom and democracy.