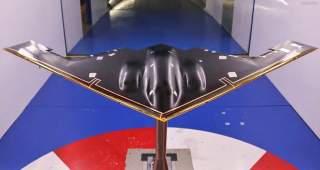 The first B-21 stealth bomber is in production for the U.S. Air Force. But the high-tech new bomber isn’t alone. Photos have emerged depicting a scale model of China’s own, in-development stealth bomber.

Northrop Grumman is building the first B-21 at its facility in Palmdale, California. The company in 2015 won the contract to develop and build potentially more than 100 B-21s. The Air Force intends to field the flying-wing bombers as replacements for existing B-1 and B-2 bombers.

“Today we do have an airplane in there that would be our test jet number one,” Randall Walden, director and program executive officer for the Air Force’s Rapid Capabilities Office, told National Defense magazine. “I won't go into a lot of detail [on] how far along we are, but suffice it to say, ... we're working the production line literally today.”

The B-21 could make its first flight in late 2021 or early 2022. “Things like large components coming together, integration, ground tests — all the things that lead up to a first flight — have to be accomplished,” Walden said. “There's a lot of things that have to happen between now and a couple of years, … but in general terms, that's what we're shooting for.”

The Air Force still hasn’t decided how many B-21s to buy. The service hopes for each bomber to cost around $600 million. “We’re exploring the force structure between the B-1, the B-2 and the B-52,” Air Force vice chief of staff Gen. Stephen Wilson said in July 2019.

But Heather Wilson's announcement raises a multi-billion-dollar question. How does the Air Force plan to equip the five new bomber squadrons the service said it needed as part of its September 2018 plan to grow from 312 squadrons to 386? Adding five new squadrons could compel the Air Force to acquire around 75 extra bombers.

While Northrop builds the first B-21 and the Air Force weighs force-structure options, the Chinese air force is working on its own radar-evading bomber. In late October 2019, photos appeared online depicting a model of a stealth bomber undergoing testing in a wind tunnel.

“What's immediately most noticeable about the subject in the images is that it directly represents America's B-2 Spirit stealth bomber,” Tyler Rogoway noted at The War Zone. “There has been some speculation that this is actually China's long-awaited H-20 stealth-bomber design.”

But the H-20 might not end up looking like the B-2 does, Rogoway added. “Just because the photos show a direct copy of the B-2, it doesn't mean that it represents the H-20 design.”

By better understanding the world's only flying wing stealth bomber, China can better inform their own designs. Making a large aircraft like the B-2 controllable over a wide performance envelope is not a small accomplishment. China is deeply invested in unmanned flying-wing designs, but scaling up such a planform drastically presents a number of challenges.

So, it makes sense that China would want to better understand everything they can about Northrop's B-2 not just to apply to the H-20's design, but also for their own general aeronautical knowledge base for future projects.

The H-20, if and when it enters service, would be only the third stealth bomber type in the world after the B-2 and B-21.