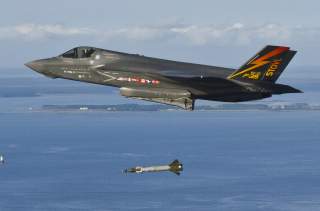 The Pentagon wants to add F-35 stealth fighters to America's missile shield. But to have any chance at shooting down ballistic missiles, the F-35 might need a new weapon.

The F-35, versions of which are operational with the U.S. Marine Corps and U.S. Air Force and should enter service with the U.S. Navy in 2019 "can track and destroy adversary cruise missiles today, and, in the future, can be equipped with a new or modified interceptor capable of shooting down adversary ballistic missiles in their boost phase."

That's the official assessment from the Pentagon's 2019 Missile Defense Review, the U.S. military's first such review since 2010. "Missile defense is an essential component of U.S. national security and defense strategies," the review asserts.

The BMD force soon could expand to include some of the roughly 2,300 F-35s the Marine Corps, Air Force and Navy plan to buy through the 2030s. "In the future, additional missile-defense capabilities such as the F-35 ...  could also contribute to U.S. mobile capabilities to be surged as necessary in crisis or conflict," the review states.

But concept is risky. The F-35 might need a new missile in order to have any chance at shooting down a rocket. And it's not clear that the U.S. military has made any effort to develop such a weapon.

The Pentagon for years has tinkered with the F-35's BMD capabilities without every fully developing them. In 2014 a test plane carrying a copy of the F-35's infrared sensor tracked a rocket launch and transmitted the tracking data over the military’s Link-16 data network. In 2016, a Marine Corps F-35B detected and tracked a missile and passed the data to a Navy Aegis missile-defense system.

But the idea of an F-35 actually shooting down a rocket is "cray cray," Jeffrey Lewis, a nuclear expert at the Middlebury Institute of International Studies in California, told The National Interest.

The Advanced Medium-Range Air-to-Air Missile is the F-35's only long-range missile in U.S. service. The AMRAAM needs atmosphere in order to steer. So an F-35 would have to shoot down the ICBM before it climbs above 100,000 feet. That gives the pilot just a few minutes to detect and engage the rocket after it launches.

"This sets such a short timescale for detection and interception you’d have to be very close to the launch site," Laura Grego, a missile expert with the Massachusetts-based Union of Concerned Scientists, told The National Interest.

In its farthest-flying variant, the AMRAAM reportedly can travel around 90 miles. America's rivals such as North Korea launch their rockets from deep inside their own territory. "How do you get the F-35s in there safely?" Grego asked. "I think you would have to already be occupying North Korea to use it."

A new missile could mitigate if not solve the problem. In 2017 the U.S. Defense Department launched a two-year engineering assessment of the new Long-Range Engagement Weapon, a potential far-flying replacement for the AMRAAM.

But the LREW, while subject to study, apparently isn't in active development. If the Pentagon started actually working on a new missile in 2019, it might not be ready for combat until the mid-2020s.

"I’d say six to seven years to essentially work out the concept of operations [and] develop the capabilities — [whether] it’s sensor-based or a new fast missile that’s hung on the bottom of an F-35 for the BMD mission — integrate those capabilities, test them and deliver them into a theater of operations,” Air Force general Samuel Greaves, head of the U.S. Missile Defense Agency, told the Senate appropriations subcommittee on defense in April 2018.

"We see that deployed capability as, if not a game changer, then a significant contributor to future ballistic missile defense," Greaves added.

But even a longer-range missile could require an F-35 to patrol inside enemy territory within range of launch pads, evading air defenses while waiting for the enemy to launch a rocket.