America's F-35 vs. China's J-31 Stealth Fighter (This Video Breaks It All Down) 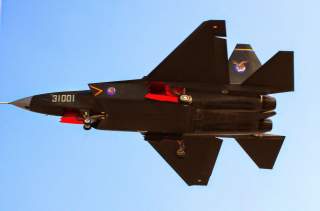 Moreover giving the heavy smoke from exhausts heat signature is very high for the J-31 and could affect its stealthiness.

The Shenyang J-31 (F-60) is a fifth-generation, multi-role, twin-engine stealth fighter aircraft being manufactured for the People’s Liberation Army Air Force (PLAAF) by Shenyang Aircraft Corporation, an affiliate of Aviation Industry Corporation of China (AVIC). It is the second stealth fighter that China has indigenously developed after the J-20.

The J-31 fighter jet is intended to provide advanced defence capabilities in close-air support, aerial bombing and air interdiction operations. According to Air Force Technology it can also perform suppression of enemy air defences and can be used as a carrier-based fighter on aircraft carriers.

Noteworthy as we have previously reported an interesting rendering of

Last May the U.S. Air Force (USAF) decided to reactivate the 65th Aggressor Squadron (AS) to act as a fifth generation aggressor squadron at Nellis Air Force Base (AFB) and move nine non-combat capable F-35A aircraft from Eglin AFB, Florida, to the unit.

We can assume that the J-31 camo will be the aggressor scheme worn by 65th AS Lightning IIs.