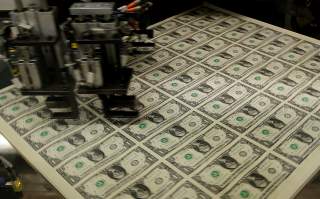 Restoring fiscal sanity to Congress is a matter of national security, the chairman of the House’s largest Republican caucus says.

“It’s not a sustainable trajectory,” Rep. Mike Johnson, R-La., chairman of the Republican Study Committee, said of a national debt that has topped $22 trillion.

“It’s not when we have military officials, the Pentagon officials, the top brass come in and testify to Congress under oath,” Johnson said. “They always say when they’re asked the question, ‘What is the No. 1 threat to national security?,’ they say debt is not a sustainable trajectory for the country. We have to address it.”

Johnson, joined by Rep. Jim Banks, R-Ind., the RSC’s budget and spending task force chairman, spoke in a conversation Tuesday at the Rayburn Building on Capitol Hill moderated by Genevieve Wood, a senior adviser and spokeswoman at The Heritage Foundation.

Banks said he believes the national debt can be decreased by reforming programs such as Medicare, Medicaid, and Social Security.

“We have to find ways to reform those programs to, one, make them sustainable and allow them to survive into the future, but also make reasonable and responsible modifications,” Banks said.

The Republican Study Committee is expected to release a plan in early May as a blueprint to balance the budget and cut government spending.

The goal, Johnson said, is to educate Americans on the seriousness of the national debt and to address it.

“We don’t have another generation, we don’t have 20 years, we don’t even have 10 years. This has to start yesterday,” Johnson said, adding:

And that’s why we’re urging this difficult conversation, to make everyone face this. I think the polling does indicate that the American people are beginning to wake up and realize what a tremendous threat the debt is to us and that we have to make difficult decisions to address it. Now this is the responsible and right thing to do.

Banks said President Donald Trump has been consistent in his efforts to balance the budget in his spending proposals, the latest of which the president released March 11 for fiscal year 2020.

“This being the third budget proposal by this president, each time right out of the gate this president has been consistent in balancing the budget and providing a fiscally conservative vision for the budget,” Banks said.

“That says a lot about this president and … we haven’t seen in a long time, if ever, that we have someone in the White House who cares deeply about these issues.”

This article by Rachel del Guidice originally appeared at The Daily Signal. This article first appeared in 2019.