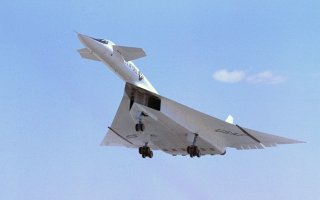 The XB-70 Valkyrie, a prototype plane that was developed in the 1950s by North American Aviation, and was meant to cruise at Mach 3+ while flying at high altitudes. The line, however, was canceled by the early 1960s, once it was clear that there wasn’t much use in that stage of the Cold War for high-altitude manned aircraft.

There remains only one Valkyrie jet, and it lives at the  National Museum of the United States Air Force (NMUSAF) in Riverside, Ohio. And last fall, it took a rare trip outdoors.

Aviation Geek Club reported this week that last October, the one remaining North American XB-70 Valkyrie was pushed outside, as part of a gallery redesign at the museum. In 2015, the XB-70 Valkyrie was moved into the museum’s new fourth building, which opened to the public the following year.

The Geek Club describes the Valkyrie as “the largest and heaviest airplane ever to fly at Mach 3.” It was one of only two of the planes that survived, and became the only one following an accident in 1966 that killed two pilots. The remaining Valkyrie has been set up at the museum since 1969.

The NMUSAF’s Public Affairs Division released a video of the Valkyrie being moved.

Defense writer for the National Interest, Caleb Larson described the Valkryie back in March as “the fastest bomber never built,” and talked about some design aspects of it that contributed to other designs later down the road.

“A number of new and experimental technologies were planned to go into the XB-70, including an exotic new type of fuel. This boron-based fuel, known colloquially as zip fuel, was more energy dense than gasoline or jet fuel and was thought to give range and speed advantages to jets that were equipped to burn it,” our report said. “The jet was designed to exceed the speed of the B-58 and fly at Mach 3. This blisteringly high speed was to be achieved by six turbojet engines that produced a massive 28,000 pounds of thrust each, with an afterburner. Despite the bomber's significant size, weight was kept to a minimum by making extensive use of light-weight honeycomb paneling and titanium.”

Among the other projects that the tech contributed to include the B-1B Lancer bomber, the SR-71 Blackbird spy plane, and more.

The National Interest also showed a rare photo of a movable “wind screen” for Mach 3 flight.

“The XB-70 had a movable windshield and ramp. These were raised during supersonic flight to reduce drag. When the pilot was ready to land, he lowered the assembly to give both him and his copilot a clear view of the runway."