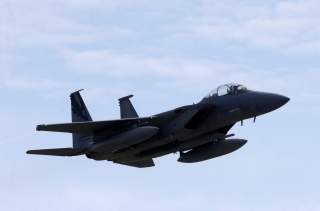 Key Point: America might soon be playing catch-up with Russia and China.

The United States Air Force is in the midst of a transformational shift. Since the 1990s, all new combat aircraft accepted into inventory have been designed with stealth in mind. Stealth is considered a key aspect of survival over the modern battlefield.

But an all-stealth force has been an extremely expensive proposition. Declining defense budgets during the 1990s and a focus on the Global War on Terror in the 2000s have meant that many legacy aircraft continue to fly on. As the U.S. military begins to reorient towards conflicts with major conventional powers it’s worth asking: how well would the older planes do against modern adversaries?

The F-15 Eagle entered production in 1973. Designed with the lessons of the air war over Vietnam in mind, the F-15 was conceived as a strictly air superiority aircraft without concession to the air-to-ground role. The last F-15 was purchased in 2001.

The F-22 was originally meant to replace the F-15 in Air Force service, but production was halted by then secretary of defense Robert Gates after just 187 aircraft. As a result, 178 F-15s are being upgraded to the latest “Golden Eagle” standard, allowing them to serve for decades more. Each candidate for the upgrade program tested for age-induced cracks and other wear-and-tear issues.

How would the F-15 Golden Eagle fare against Russia’s frontline fighter, the Sukhoi Su-35? The two aircraft are virtually cousins: both are descended from heavy, twin-engined Cold War air superiority fighters. Like the Golden Eagle, the Su-35 is actually an updated version of the Soviet Union’s Su-27 Flanker fighter.

The F-15 Golden Eagle holds the edge in sensors—the APG-63V3 AESA radar is superior to the Su-35’s IRBIS-E phased array radar. Dave Majumdar states that the F-15 may have a faster overall speed, but the Su-35 can accelerate more quickly. The Su-35 also has three-dimensional thrust vectoring and highly maneuverable at low to moderate speeds—as the so-called “Cobra Maneuver” aptly illustrates. The Golden Eagle can carry up to eight AMRAAM missiles, but the Su-35’s formidable electronic warfare suite will mean that won’t translate to eight air-to-air kills.

Overall, the F-15 and the Su-35 are pretty much evenly matched—one fighter may hold an advantage in one area, but neither is decisively better than the other. In a battle between these two types of planes, air doctrine, command and control, and pilot training will be the deciding factors.

How would the F-15 fare against PAK-FA, the new Russian-Indian superfighter? Less is known about PAK-FA as opposed to the Su-35, so any analysis is almost purely conjecture.

As a fighter built from the ground up with stealth in mind, PAK-FA has the lead over the F-15 in detection. The fighter has a stealthy airframe and uses radar-absorbent materials, but at this point it’s difficult to judge the stealthy aspect’s effectiveness—Russia has never produced a stealth fighter before. An effective stealth design could place the non-stealthy F-15 at a serious risk of an aerial ambush, and its aging electronic countermeasures suite would make it less capable of spoofing incoming missiles.

Finally, the main missile equipping PAK-FA is the K-77M, an updated version of the 1990s-era R-77 missile. K-77M will have its own AESA radar, two-pulse motor and a range of two hundred kilometers. If true, this will make it considerably more effective than the Eagle’s AIM-120D AMRAAM and at longer ranges. For now, it’s quite likely that PAK-FA—once the bugs are finally ironed out—will outclass the F-15 Eagle by a considerable margin.

The J-20 is the third adversarial fighter we’ll consider here. First introduced in 2011, the Chengdu J-20 is China’s first fifth-generation fighter. A clean sheet design, the appearance of Chengdu’s large, twin-engine stealth fighter came as a shock to Western observers. The J-20 is allegedly in low-rate initial production, or at about the same stage in development as the F-35 Joint Strike Fighter.

It’s difficult to make of the J-20 and how the F-15 would fare against it. For one, we don’t know what role it will be assigned: it could end up being a beyond-visual-range fighter, a stealthy strike jet, a maritime attack plane or something capable of performing all three missions. We don’t know how good its stealth is, but with China new to the game, it will most likely fall behind the Americans and even behind the effectiveness of PAK-FA’s stealth. The engines are another question mark, with China apparently relying on an indigenous design over Russian engines.

If the J-20 turns out to be an air superiority fighter, it could be a very dangerous opponent for the non-stealthy F-15 Eagle. As a strike or maritime interdiction plane, it would likely only engage the Eagle in self-defense with short-range missiles, counting on its speed and stealth to avoid an air-to-air fight. One thing is for sure: with the J-20 entering LIRP just five years after introduction, the Chinese seem to think they have a winner on their hands.

This piece first appeared in 2016. It is being republished due to reader interest.