America's Military Is Back! (Well, Sort Of) 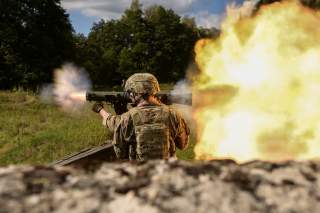 In recent years, perhaps no one has felt the pinch of budget cuts more than the U.S. military.

Though Congress must remain responsible stewards of taxpayer dollars, injudicious cuts to defense did unnecessary damage to our armed forces.

Thanks to recent action from Congress, however, the military has cause for optimism. Congress took the first critical steps to rebuild the military by raising the spending caps and providing additional funding for defense in fiscal years 2017 and 2018.

As that rebuilding gets under way, The Heritage Foundation’s Index of U.S. Military Strength will remain a key source for tracking the progress.

On Thursday, The Heritage Foundation launched the fifth edition of its annual Index of U.S. Military Strength. The index provides a pulse check for Congress and the military services by identifying clear and stable metrics with which to assess the strength of the U.S. military. It enables policymakers to see the effects of budget cuts and appropriations delays, and track trends over time.

For the first time since its initial release, the 2019 index is not all bad news. Members of Congress fought hard to raise spending caps, and these investments have already begun to show.

1. Army readiness is on the rise due to increased funding for training and maintenance in fiscal years 2017 and 2018.

2. Additional funding for Navy programs in fiscal year 2018 enabled the service to accelerate procurement of the first ship of the LPD-17 Flight II class, which is set in place to replace the Navy’s LSD-type ships. The Navy had not expected to begin procurement until fiscal year 2020.

Despite these improvements, the U.S. military remains only “marginally” able to meet the missions demanded of it. Rebuilding the military from its current state will take time, and maintaining a strong national defense will depend on consistency over time and from across the aisle.

The threats of near-peer adversaries once assumed contained have re-emerged and the technological intersections are now “clear and present” rather than hypothetical and futuristic. The sheer number of adversaries has increased, and the threat domains are more diverse—air, space, cyber, maritime—and they all matter. This complexity will only continue to increase.

This year was a victory for defense. Ernst and her colleagues on the Armed Services committees worked with the White House to pass some of the top priorities for U.S. national defense in the fiscal year 2019 budget. According to Ernst, “This year’s National Defense Authorization Act, for instance, was the earliest defense policy bill signed into law in over four decades.”

Unfortunately, without an imminent threat, it can sometimes be hard to garner and sustain support for defense spending. Just as no one likes regular visits to the dentist, almost anyone would rather spend their time and money elsewhere.

But prevention is far less painful than a filling, or a root canal. By investing consistently in defense, Congress can deter future threats and take steps to keep the U.S. safe, now and into the future.

If the world is going to continue to reap the benefits of a stable U.S.-led world order, America must prioritize its own defense and remember that peace is safeguarded through strength.

Is the Army Testing a Super Gun to Replace the M4?