Is America's Most Deadly Aircraft Carrier Ever in Trouble? 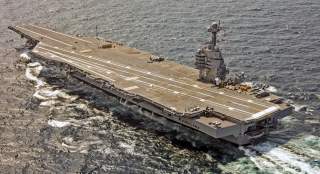 As it did with the catapult, the Navy decided to use unproven technology for Ford’s electrical arresting system to capture aircraft during landings. This system, too, has been more of a challenge than the Navy expected. “With the benefit of hindsight, it was clearly premature to include so many unproven technologies,” the Pentagon’s top weapons-buyer Frank Kendall wrote in an August 2016 memo.

Navies around the world have been using arresting systems for more than a century to land aircraft on ships. The Navy installed its first system, consisting of sandbags and cables, on USS Pennsylvania in 1911. The Navy currently uses a hydraulically braked arresting system called the Mk. 7 on the current Nimitz-class aircraft carriers.

When the hook on the landing aircraft catches one of the cables on the deck, the cables are braked by an engine inside the ship. In effect a very large shock absorber, this engine is a plunger inside a cylinder filled with hydraulic fluid. When pulled by the deck cable, the plunger compresses the fluid which then flows through a metered valve calibrated to handle the weight of the type of aircraft being landed. The compressed fluid absorbs the energy of the landing and brings the aircraft to a stop in only 340 feet.

This hydraulic arresting gear system has been in use since 1961 and has been improved several times over the years. But as a high-tech selling point, it’s a non-starter. In order to get increased funding for the Ford program, the Navy chose to replace the proven hydraulics with an entirely new and untested electrical system, called the Advanced Arresting Gear.

The original 2005 estimate for AAG development alone was $172 million. This figure was revised upwards in 2009 to $364 million, and has now ballooned to well over $1.3 billion, an astounding 656 percent increase.

The AAG is also built by General Atomics, and, as with the EMALS, the company doesn’t have any prior arresting gear experience. The AAG is based on a “Water Twister,” a paddlewheel inside a cylinder of water. When spun by the pull of the deck cable, the paddlewheel uses the resistance of the water to absorb 70 percent of the energy of the landing plane and bring it to a stop — with fine-tuning of additional braking forces provided by a very large electric motor. At least that is how it is supposed to work.

The Department of Defense Inspector General concluded in a July 2016 report that the entire program has been mismanaged.

“Ten years after the program entered the engineering and manufacturing development phase, the Navy has not been able to prove the capability or safety of the system to a level that would permit actual testing of the system on an aircraft carrier.”

Separately from the twister failures, earlier failed tests revealed damage to the AAG’s cable shock absorber that the Navy attributed to the design’s complexity. This problem was also reportedly corrected.

Nevertheless, the latest reliability results show only 25 landings between operational mission failures of the AAG, 660 times fewer than the Navy’s requirement of 16,500. This makes it utterly impossible for Ford to meet its surge sortie rate requirements. And, in an astonishing design oversight exactly like that of the EMALS, General Atomics engineers made it impossible to repair AAG failures without shutting down flight operations — the AAG power supply can’t be disconnected from the high-voltage supply while flights continue.

Even after spending an estimated $1.3 billion, the ability to correct the AAG’s dangerous unreliability remains so uncertain that the Navy cannot yet commit to a schedule for actual at-sea testing of Ford.

Problems with the AAG are so bad that the Department of Defense asked the Navy to study shelving the idea completely for the follow-on ships in favor of an enhanced version of the proven Mk. 7 system currently in service.

However, recommending to drop the AAG after spending $1.3 billion would have been a major admission of failure. Unsurprisingly, the Navy decided to stick with the AAG and push forward with plans to install it aboard the second Ford-class ship, John F. Kennedy.

That decision may get overturned now that the Navy has had to report the AAG program’s costs exceed its 2009 estimate by at least 50 percent, triggering an automatic review. This is called a “Nunn-McCurdy” breach, named after the 1982 law that requires the Pentagon to review major weapon programs when their costs rise above certain levels.

If a program’s cost estimates increase more than 50 percent, the program is supposed to be automatically cancelled unless the Secretary of Defense certifies the program as critical to national defense.

Of course it is extremely rare for any program to actually be cancelled by such means. The AAG will likely provide further proof of Fitzgerald’s First Law of defense acquisition. “There are only two phases of a program. The first is, ‘It’s too early to tell.’ The second: ‘It’s too late to stop.'”

Aircraft carriers require a lot of power. Earlier carriers used nuclear reactor-generated steam to drive two of the most power-hungry systems on board — the steam turbines that turn the propellers and the steam catapults that launch the planes.

The Ford-class ships retained steam turbines for propulsion, but rather than piping steam from the reactors to power major ship systems directly, it uses steam to turn four main turbine generators to generate electricity for the systems like the new electromagnetic catapults. Generating and managing the massive amount of electricity the ship needs has been a significant contributor to its budget and schedule troubles.

To feed these massive electrical demands, as well as the ship’s expanded electronics, the Ford’s four generators were designed to provide triple the total electrical power provided by the eight generators on the Nimitz class — 13,800 versus 4,160 volts.

These new ultra-high voltages pose substantial risks such as increased safety problems and increased electrical arcing and failure rates, particularly in humid salt atmospheres. They are also much more fragile than legacy systems, which can make the ship far easier to cripple in battle. Repairing damage to these systems often requires them to be powered down, which could impact other systems that didn’t sustain damage.

The possibility that these risks could require substantial ship modification or render Ford unsuitable for combat cannot be assessed until the completion of operational testing in 2020.

The Ford-class ships will be equipped with two newly developed Bechtel-built A1B nuclear reactors that together will generate approximately 25 percent more total thermal power and 300 percent more electrical power than Nimitz’s A4B reactors. In the hopes of reducing the reactor operating manpower by two-thirds, the new reactors will halve the control valves, pumps, and piping and will be far more dependent on control automation than legacy reactors.

The relatively inflexible automation and grossly reduced manning may significantly reduce Ford’s ability to operate and survive in the face of battle damage. This is a problem inherent in the quest for strict efficiency. Because of the reduced manning, fewer people are available to fix problems in the event of battle damage. But the full implications of the risk cannot be assessed until operational testing is finished.

Underlining the risks of the inability to deal with battle damage associated with automation and ultra-high voltages, Ford suffered a small electrical explosion on one of the four new MTGs in June 2016. The explosion threw debris into the turbine and sent smoke billowing throughout the ship. This incident was quickly followed in July by another similar event in a second MTG. A Navy investigation showed that both explosions were caused by faulty voltage regulators.

Fixing the damage is expected to cost approximately $37 million. As a temporary fix to prevent yet more delays to commissioning and in order to resume testing, the rotors inside both generators were removed and replaced. But, according to the Navy, MTG No. 2 will have to complete additional “full repairs” when the ship is in the post-shakedown phase, after it is commissioned.

These full repairs may be quite extensive. The Navy says the MTG can be repaired in place by replacing the unit’s rotors, but this will only happen during the post-shakedown overhaul period after Ford’s commissioning.

This means that Ford will be commissioned and put into active service with only a temporarily repaired electrical system. It will then have to return to the shipyard to undergo major generator repair work before plane launch and recovery tests can even commence.

All of these systems have yet to be pitted against perhaps the biggest testing challenge any new Navy ship must face — Full Ship Shock Trials. These critical tests discover whether each new ship class is suitable for combat, and occur when the fully kitted-out ship heads out to sea with its crew.