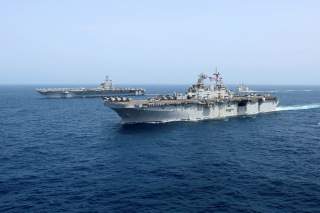 Key Point: Such a plan has historical precedent.

The concept, for example, is to enable a Paladin or HIMARS to kill that enemy ship from the land, weapons developers and senior service leaders have said.

While posited at a theoretical prospect, senior Pentagon leaders have explained that this kind of “cross-domain” fires has already been demonstrated and is now gaining momentum within senior Pentagon circles.

JREAP enables tactical data messages to be transmitted long distances, over the internet, effectively extending the range of the Link-16. Due to the internet, JREAP-C tracking data can then be passed, developers have explained. The JREAP-C “cloud” is necessary because Link-16 is already over-subscribed, senior Navy leaders and weapons developers have explained earlier this year.

The Navy is now closely coordinating the strategy, tactics and approaches of cross-domain fires with the Army and Air Force, senior officials explained.

This instance demonstrates a significant example of the inverse scenario from the Gulf War wherein stealth bombers and fighter aircraft were used to destroy Iraqi Air defenses, clearing the way for a ground invasion. Although the first shots were fired by ground force helicopters in an effort which would be characterized as a ground attack, the full-scale initial attacks in a broad scale invovled air-attacks which immediately followed. The first helicopter strikes knocked out Iraqi early warning radar as a way to open the door for the larger air-attacks. The combination of these efforts set the stage for a subsequent successful ground invasion.