America's Spies Warn: Space Is Getting a Lot More Dangerous 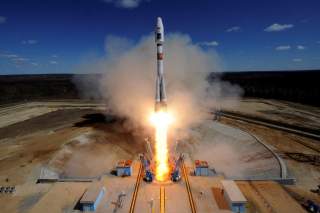 Russia and China are developing space weapons that could pose a serious threat to the United States' own satellites. Equally worrying for U.S. spies and planners, space technology is becoming so cheap -- and so powerful -- that poorer countries and potentially even non-state actors also could get their hands on orbital weaponry.

That's one conclusion in the 2019 edition of the U.S. intelligence community's strategy report. "The strategic environment is changing rapidly, and the United States faces an increasingly complex and uncertain world in which threats are becoming ever more diverse and interconnected," the report warns.

The U.S. intelligence community includes 17 agencies, most notably the CIA, the military's Defense Intelligence Agency, the signals-eavesdropping National Security Agency and the satellite-operating National Reconnaissance Agency. As a group, the agencies worry about space.

"Our adversaries are increasingly leveraging rapid advances in technology to pose new and evolving threats — particularly in the realm of space, cyberspace, computing and other emerging, disruptive technologies," the report notes. "Technological advances will enable a wider range of actors to acquire sophisticated capabilities that were previously available only to well-resourced states."

"Many aspects of modern society—to include our ability to conduct military operations—rely on our access to and equipment in space," the intelligence community pointed out in its report.

"No longer a solely U.S. domain, the democratization of space poses significant challenges for the United States and the I.C. Adversaries are increasing their presence in this domain with plans to reach or exceed parity in some areas. For example, Russia and China will continue to pursue a full range of anti-satellite weapons as a means to reduce U.S. military effectiveness and overall security."

In addition to ground-based jammers, lasers and rockets that can mute, blind and destroy low-flying satellites, Moscow and Beijing are working on small, maneuverable satellites that can tamper with American spacecraft.

Between 2013 and 2015, the Russian government launched several mysterious satellites into low orbit. Zipping across orbital planes hundreds of thousands of feet above Earth, the nimble little Kosmos-2491, -2499 and -2504 spacecraft — which apparently were the size of mini-refrigerators -- were able to approach within just a few feet of other satellites.

"You can probably equip them with lasers, maybe put some explosives on them,” Anatoly Zak, a space historian, said of the Kosmos triplets. “If [one] comes very close to some military satellite, it probably can do some harm."

In June 2016, the Chinese space agency launched its Roaming Dragon satellite into low orbit. Officially, Roaming Dragon is a space-junk collector. Its job, according to Beijing, was to pluck old spacecraft and other debris from Earth’s orbit and safely plunge them back to the planet’s surface.

Russia and China aren't alone in deploying these weaponizable spacecraft. The United States, Sweden and Japan also have tested maneuvering satellites that could perform the close-flying tricks that the new Russian and Chinese craft apparently were capable of doing. But Moscow and Beijing are deploying these potential space weapons in greater numbers than other countries are doing.

Equally troubling for the Pentagon, civilian space operators now can acquire weapons, too. In early 2018 British company has announced plans to launch two new "space tugs" designed to attach to old communications satellites and give them a life-extending boost in orbit.

But the Space Drone tugs, built by London-based Effective Space, are capable of so much more. Under the right circumstances, they—and spacecraft like them—could become weapons.

The 800-pound, cube-shape Space Drone is essentially an orbital tugboat. The spacecraft features a docking system and a small motor. A Space Drone can maneuver close to an aging satellite that’s slowly falling back to Earth, attach to it, fire up its own motor, and shove the comms sat back into its proper place.

Instead of boosting old but still active satellites, the Space Drones could attach themselves to orbital debris—which poses a collision risk to active satellites—and direct the junk into Earth’s atmosphere to burn up. There’s no reason a Space Drone couldn’t do the same thing to an active satellite, in essence hijacking it and sending it falling to its destruction.

"There is of course a potential that certain regimes will find such technology abusively interesting," said Daniel Campbell, the managing director of Effective Space. He compared the Space Drone to autonomous cars, lasers, drugs and software 'bots, all technologies with the "potential to be abused."

"Increasing commercialization of space now provides capabilities that were once limited to global powers to anyone that can afford to buy them," the intelligence community warned in its report.

"While the I.C. remains focused on confronting a number of conventional challenges to U.S. national security posed by our adversaries, advances in technology are driving evolutionary and revolutionary change across multiple fronts."

"The I.C. will have to become more agile, innovative and resilient to deal effectively with these threats and the ever more volatile world that shapes them."