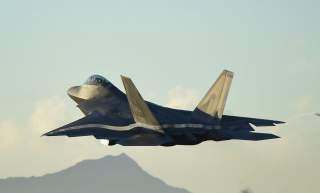 The U.S. Air Force has a problem. Its two stealth-fighter types, the F-22 Raptor and F-35 Joint Strike Fighter, can’t exchange data between them. Both fighters feature their own, unique data-link for secure information-sharing.

That could change. The Air Force is considering adding both the F-22’s line-of-sight Intra-Flight Data Link and the F-35’s Multifunction Advanced Data Link, which also is a line-of-sight system, to the XQ-58 wingman drone that the service is developing.

An operational version of the XQ-58 could fly in a mixed formation of F-22s and F-35s, functioning as a data gateway between the two types. The Air Force calls the concept “GatewayOne.” It plans to test the idea in December 2019.

“The Air Force wants the December tests to be a proof of concept showing that it can do this job,” Joseph Trevithick reported at The War Zone.

For this phase of experiments, the service plans to install the system on a test stand on the ground and have Raptors and Joint Strike Fighters flying above try to send information through it successfully.

If GatewayOne works in that limited environment, the Air Force wants to then install it on an XQ-58A and test the system in the air sometime in April 2020. The service is working with Kratos to develop Valkyrie as a low-cost, stealthy platform that can work together tethered together with manned platforms in the "loyal wingman" role, as well as by itself or in networked swarms.

These drones are supposed to be what the Air Force describes as "attritable," meaning that they are cheap enough that commanders do not have to worry as much about whether or not they survive a mission.

What might come after that is unclear, but it is possible that this system could find its way onto various other platforms, manned and unmanned, to provide this capability.

The December 2019 test is the first in a planned series of communications experiments that Air Force acquisitions chief Will Roper called “connect-a-thons.”

“The experiments are to happen every four months,” Aaron Mehta reported at Defense News. “The goal is to identify a fleet of aircraft with a communications issue, invite voices from inside and outside the Pentagon to offer solutions, and then test those offerings in a live experiment.”

“We’re making it up as we go, right?” Roper said. “There’s never been anything like this. We need a way for people to propose connections and get into the pipeline. So I wouldn’t be surprised at all if it ends up being like a pitch day ... having a proposal process where we review the maturity of the tech versus the benefit to the war fighter. We would do the former, our operators would do the latter."

“And what I love about this is it’s kind of a competition within the joint force," Roper added. "We’re going to be looking for the fast movers to volunteer, then we’ll be looking at the fast followers.”

Since 2005 the flying branch has installed Battlefield Airborne Communication Node technology on a small number of Global Hawk drones and Bombardier business jets. The BACN planes can fly over a battlefield, helping to connect various air, ground and sea forces with their disparate and incompatible data-links.

While it weighs a wingman drone as a comms node, the Air Force is working on a back-up plan to help the F-22 connect to other forces. The Air Force and Lockheed Martin in 2020 plan to begin installing on the roughly 180 F-22s a basic version of the Link-16 data-link.

But the F-22’s Link-16 won’t be as secure as its own, unique data-link is. For truly stealthy networking, the Air Force’s stealth fighters might have to wait for a helpful drone to translate between them.