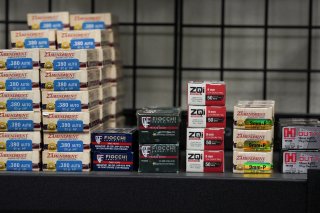 An ammunition shortage has been affecting the United States since the start of the pandemic. Most media coverage has dealt with the effect the shortage has been having on hunters, especially during crucial hunting seasons.

However, a new report says that in one part of the country, at least, the shortage is beginning to affect law enforcement.

According to WEVV, police and sheriff departments in Indiana and surrounding states are having trouble keeping up with their demand for ammunition, with supplies low and prices high.

"When Covid really kicked in, we saw across the United States, law enforcement having issues finding ammunition,” Vanderburgh County sheriff Dave Wedding told WEVV, adding that law enforcement carries more ammunition at a time than they did a generation ago.

Some area departments told WEVV that they’ve been ordering ammo a year in advance. One sheriff told the outlet that most of their ammo is for the range; sometimes, departments will even borrow from one another.

Why Ammo Is Hard to Find

What's the reason for the ammo shortage? It’s been attributed to a wide variety of factors: the pandemic and the social unrest that followed later in 2020 led to an explosion in new gun ownership, and therefore a shortage of ammunition. At the same time, many took up outdoor shooting sports during periods of pandemic boredom.

At the same time, there were pandemic-related supply chain issues that further made the problem worse, including Remington’s bankruptcy knocking out that company’s manufacturing capacity for much of 2020. In the year since, ammunition manufacturers have increased their capacity, but not enough to make a big difference. Meanwhile, supply chain troubles have been blamed on corporate consolidation: two companies, Vista Outdoor and the Olin Corporation, currently dominate U.S. industry.

On his Substack, Matt Stoller wrote back in January about the ammo shortage, and how it ties in with inflation: “Like a lot of industries, there are cost pressures in ammunition; the price of raw materials, like brass, have gone up,” Stoller wrote. "Additionally, the State Department has blocked imports from Russia, adding to the pricing pressure. But the cost story is really a sideshow; the pricing increase is going almost entirely to profit. For Vista, margins skyrocketed in 2020, and continued to increase in 2021.”

Stoller added that there are reasons for the concentration, but it’s mostly because ammunition is a hard industry to get into. “Ammunition is difficult to produce, as it requires careful manufacturing processes to safely handle explosive materials. Vista recently bought its competitor Remington out of bankruptcy, lowering the number of firms in the industry that could even build a factory and distribute ammunition effectively.”