Amphibious Ships With a Punch: Navy Could Add Missiles to Assault Vessels 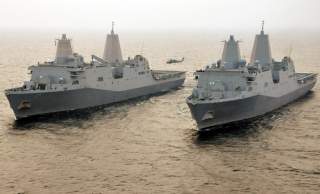