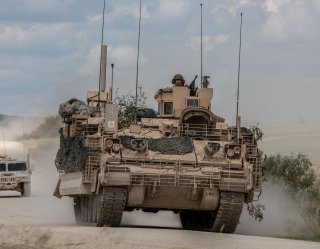 In an announcement on their company website, BAE Systems stated that the first of the Army’s much-anticipated Armored Multi-Purpose Vehicle (AMPV) rolled off assembly lines and is ready for delivery.

The AMPV platform is intended to replace the Army’s M113 family of armored personnel carriers. The M113 originally entered service in the early 1960s and has since grown somewhat long in the tooth.

“Finalizing the first AMPV for delivery marks a major milestone for the program and the U.S. Army,” stated Bill Sheehy, the AMPV program director. “The AMPV is designed to meet the Army’s missions for the Armored Brigade Combat Teams (ABCT) and lay the foundation for the future of the battlefield.”

More specifically, the AMPV is intended to be more survivable than the Vietnam-era M113 and thanks to its tracked design, more mobile than wheeled armored personnel carriers like the MRAP, despite being nearly 80% larger than the M113. The AMPV comes standard with reactive armor tiles as well as a spall liner and other appliqué armor. It also has enhanced hull underbelly protection and an automatic fire suppression system.

In addition to being standard general-purpose vehicle, the other four AMPV variants include mission command, mortar carrier, medical evacuation, and medical treatment. BAE system’s current low-rate initial production contract stipulates that 450 AMPVs will be delivered to the Army.

The BAE Systems’ AMPV contract is somewhat controversial. BAE also manufactures the similar M113 family of vehicles, which led to accusations of favoritism and unfairness from the two other competitors for the AMPV contract, General Dynamics and Navistar. General Dynamics protested BAE Systems’ AMPV award, saying that the program requirements had been written in a way to favor BAE. Despite the protest, BAE’s award was upheld.

Technicalities aside, the AMPV suffered several mechanical and design flaws during Army testing last year. Defense News reported that both commander and driver displays were prone to freezing up and long restarts. Another problem was insufficient interior space for non-digital equipment like maps. Overhead hatches did not seal sufficiently, potentially a hazard for onboard electronic equipment during wet or rainy driving conditions. Weld deficiencies were also identified. In total, forteen issues were catalogued by the Army for improvement.

Aside from the mortar carrier variant, The Army has apparently expressed interest in giving the AMPV platform more firepower, possibly via a turret equipped with a 30-millimeter gun. Currently the AMPV is equipped with a .50 caliber heavy machine gun.

Though the Armored Multi-Purpose Vehicle certainly had its share of issues—and despite the ongoing global pandemic—the platform is finally ready. Here’s to hoping no other issues are identified, and that a firepower upgrade can be found.