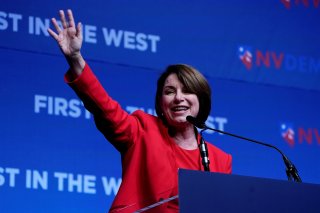 Prior to this, the National Interest published a comprehensive list of Biden’s best options for a running mate, catered to his previous public statements. Now that he has officially become the presumptive presidential nominee and could be expected to announce his vice-presidential pick imminently, the list has been cut down to who currently stands the best shot at the number two slot.

The frontrunner remains Senator Amy Klobuchar of Minnesota, who suspended her presidential campaign at the beginning of March and endorsed Joe Biden, which benefited his margin of victory on Super Tuesday. The proud moderate and congressional workhorse who campaigned on both midwestern disposition and midwestern puns, Klobuchar would be a strong choice towards retaking the Rust Belt from President Donald Trump in November.

The individual who has charged to the front of the pack is Michigan Governor Gretchen Whitmer, who among these contenders is the one most involved in grappling with the coronavirus pandemic. Michigan has the fourth-highest number of cases in the country, and Whitmer has been one of the most proactive governors in instituting social distancing procedures. These actions, which some refer to as needlessly oppressive, have garnered her national attention. With a new Tim Alberta profile in Politico, Whitmer’s chances of selection depend entirely on how she continues to handle the stresses of the pandemic into the summer.

A new addition to the list who has been gaining word of mouth is Senator Tammy Duckworth of Illinois. The fifty-two-year-old Thai American served in the U.S. Army for twenty-two years and retired with the rank of Lieutenant Colonel. In 2004, when her helicopter was hit by a rocket-propelled grenade, Duckworth lost both her legs in the crash; her right leg was amputated below the hip, and her left leg below the knee. She was awarded the Purple Heart.

In 2012 she defeated Joe Walsh for a seat in the House of Representatives, and in 2016 defeated Mark Kirk to become the junior senator from Illinois. In-office Duckworth broke barriers by being the first U.S. senator to give birth while in office, and she spearheaded the rule change allowing both babies and breastfeeding to take place on the Senate floor.

Her selection, however, would bring legal problems to the Democratic ticket; born in Bangkok, Thailand, Duckworth did not come to the United States until the age of sixteen, and the circumstances of her birth almost certainly make her constitutionally ineligible to serve.

Senator Kamala Harris of California has been a media favorite to be vice president since she suspended her presidential campaign in December. She would be a popular choice among Democratic activists, and win Biden’s campaign press plaudits.