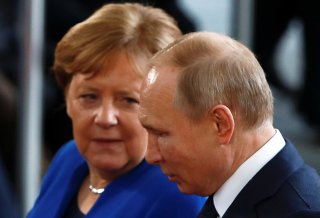 During her long tenure at the peak of German politics, German chancellor Angela Merkel has watched the gradual and then dramatic shift in Russia from unsteady, imperfect, quasi-democracy to a maturing (some would say stagnating) autocracy. Clearly, it is not Merkel’s fault that Russia slid into dictatorship on her watch, but she has had to stay nimble in order to deal with the evolution of Russian president Vladimir Putin’s regime and its foreign policy choices. Indeed, Merkel alone among Western leaders has been the most persistent over the last few years in maintaining at least a working relationship with Putin. As a young woman in what was then the German Democratic Republic (GDR), Merkel was required to learn Russian in school and she understood Putin’s lived experience under the communist system. She helped explain him to other Western leaders. Some called her the “Putin Whisperer.”

Merkel and Putin’s relationship has not been without its problems–including one meeting in 2007 where Putin insisted on introducing his enormous labrador retriever to her knowing full well that she was fearful of dogs. In 2014, after the Russian seizure of Crimea, she threw her hands up in frustration, telling then-president Barack Obama after speaking to Putin on the phone, “he’s living in another world.” Still, Merkel has been artful in balancing German interests with Putin’s bad behavior. She has held firm on the completion of the Nord Stream II pipeline that shortly will bring Russian natural gas into Germany despite strong American objections to the project. At the same time, she has managed to hold together (and even strengthened) the European Union’s sanctions on Russia since 2014.

The task of managing Vladimir Putin will soon fall to a new German Chancellor. Can they do as well as Merkel has? Can they do better? The trick for any new German leader will be to recognize that they are inheriting a different Russia compared to the one that faced Merkel when she took over the chancellorship in 2005. It has long recovered from the shock of the Soviet collapse in 1991, and despite ongoing serious economic problems, Russia is now classified by the Organization for Economic Cooperation and Development (OECD) as an upper-middle-income country. Although Russian real incomes are in decline, they are still multiples of what they were in 1991. Even in the face of Putin’s investment-killing corruption, Russia’s economy has limped along, and only partly on the back of recovering oil and gas prices. It has a relatively low debt to GDP ratio and has managed to find new markets in China, India and the Middle East for its exports (weapons, carbon energy, nuclear power plants, for example) that have now been under European and American sanctions for the last seven years. Russia’s “New Look” military reform that began in 2008 and is now mostly finished, modernized its military and produced a professionalized, nimble fighting force with battle experience in Syria. It is well equipped too with new weapons–including an array of hypersonic missiles that are nuclear and conventionally capable–and a huge advantage over any other European country in terms of tanks, aircraft, and artillery. Although only partially updated, Russia’s navy is the most powerful in Europe. Should Putin decide to roll tanks into NATO/EU member countries on Russia’s western border (the Baltic countries, for example), there would be little the West could do about it for a number of weeks if not months according to American and NATO military leaders.

Finally, and perhaps most significantly, Merkel’s replacement will have to deal with an enhanced willingness of an emboldened Vladimir Putin to actually use what Russia has developed to exercise influence far beyond Russian borders. We have seen the Reichstag itself infiltrated with cyber weapons; Russian policy preferences are broadcast throughout Europe on RT and Sputnik; and politically divisive and potentially destabilizing Russian government misinformation has penetrated German domestic politics as it has American politics.

Merkel was able to call Putin out on these sorts of interferences, but she didn’t necessarily prevent him from doing largely what he pleased. Unfortunately, her successor will face more of the same challenges with Russia as Putin’s regime grows more repressive within and aggressive abroad. Whether they will do any better than Merkel has is doubtful, but without her experience and foreign policy acumen, Germany’s new chancellor most certainly could do far worse.

Kathryn Stoner is a Senior Fellow at the Freeman Spogli Institute for International Studies.