Annoying or Real Threat? Here's What We Know About Iran's Navy 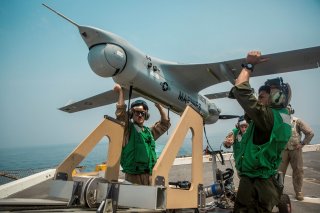 Last month the U.S. Navy released videos of Iranian speedboats that had harassed U.S. warships in the Persian Gulf. USNI News reported that 11 of the fast-moving type of watercraft from the Islamic Revolutionary Guard Corps Navy (IRGCN) swarmed a group of American vessels, which were in international waters.

At one point the Iranian vessels came within 10 yards of the U.S. Coast Guard’s Island-class cutter Maui and within 50 yards of the expeditionary mobile base Lewis B. Puller, and crossed the bows and sterns of the American vessels at high speeds. The U.S. Navy has said that the dangerous passes increased the risk of miscalculation and collision.

The U.S. crews issued multiple warnings via bridge-to-bridge radio, five short blasts from the ships’ horns and long-range acoustic noise maker devices. However, there was no response from the IRGCN.

The provocations occurred two weeks after the Harry S. Truman Carrier Strike Group (CSG) departed from the Middle East, while only the Eisenhower CSG remains in the region. This has resulted in a rare occurrence where the U.S. Navy hasn’t had multiple strike groups, which hasn’t occurred in the region in years.

Perhaps the Iranians felt it was time to engage in some high seas saber-rattling, but the end result was less a display or actual threat of military force than something from an Iranian-version of MTV’s The Jersey Shore.

Moreover, it is even debatable whether the Iranians would appreciate being described as David to America’s Goliath, given that the story comes from the Hebrew Bible, despite the fact that David is venerated in Islam as a prophet and messenger. Yet even if so, Iranian speed boats don’t have anything resembling a sling powerful enough to take down multiple Goliaths.

Instead, this is a case where the Iranians could suggest that such actions drove way the Harry S. Truman CSG, and previously Iranian state media has declared that the IRGCN had successfully challenged the USS Abraham Lincoln CSG when the warships passed through the highly strategic Strait of Hormuz.

The small attack boats can present a real danger to merchant vessels in the region, and earlier in April IRGCN boats briefly seized a Hong Kong-flagged tanker SC Taipei in the Gulf of Oman. While the tanker and its crew was released after less than a day, such actions could be seen to border on piracy in international waters. Last year the IRGCN also detained a Swedish-owned tank for multiple weeks after the Royal Navy detained an Iranian tanker off its territory in Gibraltar.

Thus the greatest threat is not what the speed boats could do to American warships, but rather how a miscalculated action could create ripples far beyond the waters of the Persian Gulf. For now “The Persian Shore” speed boats are little more than a propaganda tool, but the danger is that the wrong move could quickly escalate from harassing action to an actual exchange of gunfire. It would be terrible if that happened in a region that doesn’t need any excuses for more conflict.