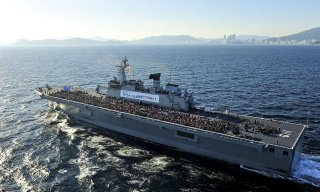 The People’s Republic of China currently operates two aircraft carriers, and has ambitious plans for additional carriers—but it won’t be the only nation to have the flat tops in the Western Pacific or Indian Ocean. In addition to the carriers in service with the navies of Japan, Thailand and India, the People’s Liberation Army Navy (PLAN) may have to contend with a South Korean aircraft carrier.

South Korea hinted last year that it had interest in building such a “multi-purpose large transport vessels,” but in recent weeks such a warship has come into better focus. It is part of the newly published Republic of Korea’s national plan for 2021–2025, which highlighted the commitment to undertake such an ambitious project.

“The 30,000-ton level aircraft carrier can transport military forces, equipment and materials and can operate fighter jets that are capable of vertical take-off and landing,” said the Defense Ministry release as reported by CNN. “It will enable the military to more effectively suppress threats and dispatch forces and materials to a disputed region in the sea by playing a role of a controlling vessel for the navy unit.”

New details about the LPX-II program, previously referred to as LPH-11, were released by Seoul on August 10. In addition, the South Korean Ministry of Defense released a new rendering of the design and it appears to be a smaller carrier than the supercarriers employed in the U.S. Navy. Unlike the Chinese PLAN or the UK’s Royal Navy carriers of the HMS Queen Elizabeth-class, it has a flat flight deck rather than the sky jump style deck that appeared in an earlier rendering.

The Drive reported that Hyundai Heavy Industries (HHI) won the contract to design the LPX-II in October 2019, and it was derived from the South Korean Navy’s Dokdo-class amphibious assault ship hull form.

Given that the carrier will support vertical take-off and landing (VTOL) aircraft this could be good news for American defense contractor Lockheed Martin, maker of the F-35 Joint Strike Fighter. The F-35B Lightning II, which is the same aircraft operated by the United States Marines Corps, is currently the only VTOL fighter jet in production in the world and it was designed specifically for use on a small aircraft carrier or in the case of the U.S. Navy on amphibious assault ships such as the USS America (LHA-6).

As the largest warship ever built by South Korea, it will be able to carry up to fifteen fighter aircraft—which could make it a serious threat to North Korea if the two nations find themselves in a true hostile situation again.

In many ways, the future of South Korea will be akin to an amphibious assault ship and could be a scaled up Dokdo—and at thirty thousand tons will be around twelve thousand tons larger than the Dokdo. However, it will not have a well-deck to launch and receive landing craft or amphibious vehicles, but past reports have suggested it could carry a total complement of three thousand marines as well as twenty armored vehicles.

Without a well-deck it is unclear how the heavy armor could be deployed, but as construction is still at least a few years away, and even the design won’t be finalized until later this year it will be interesting to see how this shapes out.