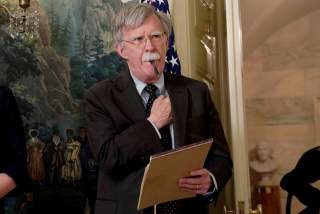 One of the Trump administration’s senior advisers could be leaving his position on the National Security Council, E&E News reported Wednesday afternoon.

William Happer is reportedly leaving his post as a senior director of the NSC on Friday after National Security Adviser John Bolton abruptly resigned, The New York Times reported, citing three people with knowledge of the move. Bolton, a longtime foreign policy hawk, supported Happer’s efforts to push back against what some say is climate alarmism prevalent in academia.

Happer was slated to lead the Presidential Committee on Climate Security, a type of expert panel to assess the potential dangers global warming has on national security. Reports of the committee first began surfacing in February.

Happer, an accomplished physicist at Princeton University, was one of the strongest voices against climate science within the Trump administration. He pushed Trump to create a commission to scrutinize U.S. military and intelligence claims that global warming is a national security threat.

Happer was brought on to the NSC in September to analyze emerging technologies. His plan is similar to the failed effort by former Environmental Protection Agency chief Scott Pruitt to hold a “red team” exercise to debate climate science. Pruitt’s plan was heavily criticized and eventually abandoned.

Happer’s idea to conduct a review of climate science was dinged after facing obstacles within the White House. He was also responsible for blocking testimony from a State Department researcher who warned Congress about the national security dangers of climate change.

The White House did not immediately reply to the Daily Caller News Foundation’s request for comment. Happer has not responded to questions about the nature of his departure. Some analysts are nw worried about what impact his departure will leave on the Trump admonition.

“There’s this big hole now,” Steven Milloy, a member of Trump’s transition team for the EPA who runs the website junkscience.com, told the NYT. “There’s nobody in the White House to pick up where Will left off, except the president.”

CO2 Coalition, a group Happer founded, applauded his yearlong stay in the administration.

“Now we applaud you for the contribution you made during this year to projects that protect the security and well-being of the American people,” Patrick Moore, an ecologist who now co-chairs the CO2 Coalition, said in a statement Wednesday.

NSC’s comment will be added should one be received on the record.