Another Load of American Weapons Arrives in Ukraine Amid Crisis 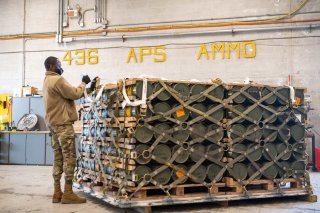 Ukraine has received a second tranche of U.S. weapons as Kiev faces the looming threat of a Russian invasion. Ukrainian defense minister Oleskii Reznikov tweeted about the shipment on Sunday.

"The second bird in Kyiv!" Reznikov tweeted. "More than 80 tons of weapons to strengthen Ukraine's defense capabilities from our friends in the USA! And this is not the end. P.S. the cargo arrived under dependable protection."

According to a joint statement issued last week by the defense ministers of Lithuania, Estonia, and Latvia, the Baltic States have received approval from Washington to provide further lethal aid to Kiev. Estonia is reportedly donating an unspecified number of Javelin anti-tank missiles, while Latvia and Lithuania are sending Stinger anti-aircraft missiles.

“Today Ukraine is at the forefront of separating Europe from the military conflict with Russia,” Estonian defence minister Kalle Laanet said, according to Defense News. “Let’s face it: The war in Ukraine is ongoing and it is important to support Ukraine in every way we can so that they can resist the aggressor… with this, we show that we support Ukraine not only with words but also with deeds. The allies are united, but there is always a need for those who show initiative. Estonia is definitely one of those countries.”

Estonia has also filed a request to transfer Soviet-era howitzers to Ukraine. The howitzers were previously owned by a newly reunified Germany and subsequently made their way to Finland before ending up in Estonia. Both Berlin and Helsinki must approve the transfer due to state-specific origin rules governing arms exports. Citing German and Estonian officials, the Wall Street Journal reported last week that Berlin has blocked the transfer.

Ongoing Western efforts to bolster Ukraine’s defenses in the event of a Russian invasion come amid reports that the Biden administration is weighing proposals to reinforce NATO’s eastern flank with “several thousand” troops. The White House is considering plans to bolster NATO’s Eastern European presence even as the Kremlin continues its military buildup along Ukraine’s eastern border. The State Department confirmed earlier this week that the families of U.S. diplomats and some embassy staff have been instructed to depart Ukraine in anticipation of a possible Russian military operation against the country.

“That is not on the table,” President Joe Biden said when asked by reporters on December 8 about American “boots on the ground” in Ukraine. “We have a moral obligation and a legal obligation to our NATO allies, if they were to [come under] attack under Article Five.  It’s a sacred obligation. That obligation does not extend… to Ukraine.”