Another Reason You Can't Stop the F-35: Drone Refueling Has Arrived 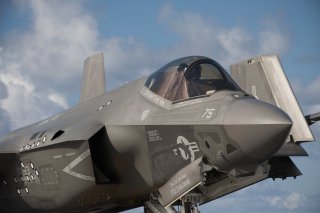 What would it mean to the U.S. Navy’s ability to project power if its carrier-launched F-35C fighter jet could instantly double its combat radius and attack range, increase dwell time over targets and launch offensive operations from more survivable, distant maritime locations? The Navy is about to find out.

The military service recently conducted its first-ever aerial refueling of the F-35C jet using a test model of the emerging, first-of-its-kind carrier-launched refueler drone called the MQ-25 Stingray. While the test flight took place over St. Louis in mid-America, the intent of course is to prepare the integrated aircraft attack and refueling system for maritime warfare and aircraft carrier attack.

“During the three-hour flight, a Navy F-35C pilot from Air Test Wing and Evaluation Squadron Two Three approached T1(TEST aircraft MQ-25), performed formation evaluations, wake surveys, drogue tracking and plugged with the MQ-25 test asset at 225 knots calibrated airspeed and altitude of 10,000 feet,” according to a Navy report. “From the ground control station, an air vehicle operator then initiated the fuel transfer from T1’s aerial refueling store to the F-35C.”

The F-35 flight was the third actual refueling flight for the T1, as it has already refueled a F/A-18 Super Hornet and E-2D Advanced Hawkeye.

“Conducting refueling test missions with various aircraft allows the program to analyze data and determine if any adjustments to guidance and control are required,” per the report.

While perhaps seemingly uneventful in some ways, the aerial refueling of a carrier-launched F-35C carries enormous implications. First, consider the refueler. The MQ-25 Stingray is a carrier-launched drone. This technological feat was made possible through massive amounts of Navy research, testing and experimentation. Landing a drone on an aircraft carrier is an extremely complex task as an aircraft must operate amid changing sea states and fluctuating weather conditions. Of course, it can take off and land from a large moving aircraft carrier. After years of effort, that technology is finally a reality. As a result, maritime power projection refueling can operate with an organic, built-in capability, meaning it does not have to rely upon large, non-stealthy land launched tankers such as KC-46 Pegasus tankers. A KC-46 tanker is not a large, non-stealthy fixed-wing aircraft, so it must launch from land. This requirement complicates its access, reach and take-off points from which to support ocean-launched aircraft.

An air-refueled carrier-launched F-35 jet simply increases attack range and brings with it valuable intelligence, surveillance and reconnaissance assets. Given that the F-35 fighter jet operates with drone-like sensors, which surround the aircraft, and has the ability to share targeting data in real-time as an aerial node, a carrier-launched drone could massively extend dwell time for the aircraft to support targeting, data sharing and surveillance missions.