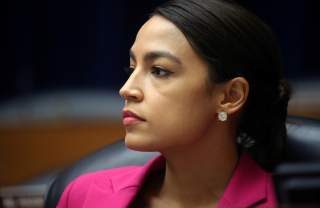 Rep. Alexandria Ocasio-Cortez and the rest of “the squad” are just the beginning of problems for House Speaker Nancy Pelosi and the left.

Socialism—and not the soft, “Scandinavian” kind—is building so much momentum that soon, it could come to define the modern-day left.

My colleague Jarrett Stepman shed light on this in attending the “Socialism 2019” conference in Chicago over the Fourth of July weekend. Despite the movement’s most famous faces trying to distance themselves from the real deal rooted in totalitarianism and rationing, behind the scenes, socialism’s true believers have no shame in sporting red shirts and openly drawing their inspiration from devout revolutionists such as Karl Marx.

This type of socialism, which Stepman describes here, stands in stark contrast to the brand of “democratic socialism” touted by figures such as Ocasio-Cortez, D-N.Y.; Rep. Rashida Tlaib, D-Mich.; Sen. Bernie Sanders, I-Vt., and their likes.

The only difference, Stepman found, is that 21st-century socialism has an added layer of wokeness, supporting transgender ideology and identity politics.

“So when millennials talk about concepts like democratic socialism, we’re not talking about these kinds of ‘Red Scare’ boogeyman,” Ocasio-Cortez claimed in an interview withBusiness Insider late last year. “We’re talking about countries and systems that already exist that have already been proven to be successful in the modern world.”

Similarly, Sanders has advocated democratic socialism for years, and says that when he talks about the idea, he’s not referring to countries like Cuba and Venezuela. Rather, he means Denmark and Sweden.

Those two nations rank as the 14th and 19th most free economies in the world, according to The Heritage Foundation’s Index of Economic Freedom, and have achieved much of their success by moving away from the more socialist elements of their economies and tapping into natural resources such as oil.

Nevertheless, Sanders summed up his position back in 2016 during a “town hall” on MSNBC.

When I talk about democratic socialist, you know what I’m talking about?

Social Security, one of the most popular and important programs in this country, developed by FDR to give dignity and security to seniors. And it has been enormously successful at reducing poverty among seniors.

When I talk about democratic socialist, I am talking about Medicare, a single-payer health care system for the elderly. And in my view, we should expand that concept to all people. I believe that everybody in this country should be entitled to health care as a right. And the most effective way to do it is through a ‘Medicare for All’ single-payer program.

All of the kids who have the ability and desire go to college.

And you know how much it costs?

The bottom line is, when I talk about democratic socialist, what I mean is moving away from where we are right now.

Sanders is right: Self-identified socialists or “democratic socialists” will debate or even disagree on the fine details, but the “bottom line” is clear: This movement wants to move “away from where we are now.”

In order to do this, there must be a destination in mind. With Teen Vogue bragging about using “clickbait” communism to propagandize young Americans, there’s little question where this movement wants to wind up—somewhere “other than capitalism,” as stated by Haven Coleman, a 13-year-old environmental activist who spoke as part of the socialism conference’s Teen Vogue panel.

Ocasio-Cortez’s chief of staff, Saikat Chakrabarti, admitted as much in a recent interview with The Washington Post, when he disclosed that the Green New Deal is not primarily about addressing the climate crisis, but rather about replacing America’s capitalist economy with a more socialist one.

“The interesting thing about the Green New Deal,” Chakrabarti said, “is it wasn’t originally a climate thing at all.”

In other words, the joke’s on us.

Polls tell us that swing state voters are repelled by the idea of socialism.

According to Axios, only 18% of likely general election voters who are white and have two years or less of college education view it favorably.

On the other hand, Americans know well who Ocasio-Cortez is, and as a freshman member of Congress, she and her “squad” have already shifted the policies the left supports from “safe, legal, and rare” to taxpayer-fundedabortion at any point, and fences and strong border enforcement to open borders.

Private rebukes by the speaker of the House won’t be enough to stop this momentum toward socialist policies.

In his State of the Union address this year, President Donald Trump declared, “Here in the United States, we are alarmed by new calls to adopt socialism in our country. Tonight, we resolve that America will never be a socialist country.”

But preventing America from becoming a socialist country isn’t just the president’s job. It’s up to Pelosi and other leaders to stop the nation from going down this dangerous path.

Because despite what the popular bumper stickers like to say, capitalism and socialism can’t coexist. Pelosi either stamps it out now, or traditional left-wing politics as we know it ceases to exist.

Kelsey (Harkness) Bolar is a senior writer and producer at The Daily Signal and co-host of "Problematic Women," a podcast. Send an email to Kelsey.