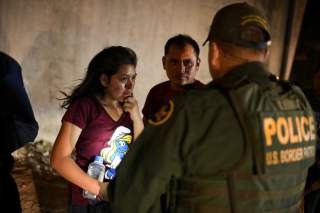 The 9th Circuit Court of Appeals handed President Donald Trump a major victory regarding his plan to prohibit most immigrants from applying for asylum at the U.S.-Mexico border.

The San Francisco-based 9th Circuit late Tuesday night rolled back a decision made by a federal judge. U.S. District Judge Jon Tigar, appointed by President Obama, had reinstated a nationwide ban against Trump’s new asylum policy on Monday, but the appeals court put the policy right back into place the very next day.

Trump’s proposed rule, first introduced in July, denies asylum to immigrants who passed through a “third” country on their way to the U.S. but did not first seek protected status there. For example, a Guatemalan migrant who travels through Mexico and requests asylum as the U.S. southern border would be turned away if he did not first request protection in Mexico.

Tigar slapped down a nationwide injunction against the asylum rule in July. However, the 9th Circuit Court of Appeals narrowed the scope of his decision in August, ruling that it could only apply within their court’s jurisdiction, which includes Arizona and California. This meant Trump’s asylum rule could still be implemented at the Texas and New Mexico border.

Tigar on Monday once again placed an injunction against third-country transit bar, finding that the plaintiffs would be subjected to a more expensive and complicated process if the asylum rule is not applied uniformly throughout the country.

“The organizations have presented sufficient evidence that they will suffer organizational and diversion of resources harms unless the rule is enjoined outside of, as well as within, the 9th Circuit,” the judge wrote. “A nationwide injunction is thus ‘necessary to give prevailing parties the relief to which they are entitled.'”

“Immigration and border security policy cannot be run by any single district court judge who decides to issue a nationwide injunction,” White House press secretary Stephanie Grisham said in a statement. “This ruling is a gift to human smugglers and traffickers and undermines the rule of law. We previously asked the Supreme Court to set aside the district court’s injunction in its entirety, our request remains pending with the Court, and we look forward to it acting on our request.”

Nevertheless, 9th Circuit again rolled back Tigar’s decision on Tuesday night, ruling that the injunction should only apply to the court’s district — which includes Arizona, California, Hawaii, Montana, Idaho, Nevada, Guam, Alaska, Washington, and Oregon. The administrative order, which was first obtained by Politico, will allow the third-country transit bar to remain in place in the border states of Texas and New Mexico. (RELATED: Mexican Government Rebukes Trump Admin After It Asks The Country To Do More On Immigration)

The Trump administration has asked the Supreme Court to allow the asylum rule to remain in effect on an interim basis while the court battle continues.