Arctic Blast: The Army’s New CATV Will Be Coming Soon 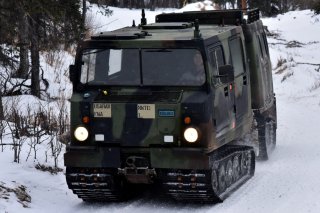 The U.S. Army announced this week that it has made a decision on the Cold Weather All-Terrain Vehicle, also known as the CATV.

“Delivery of this modernized capability for Arctic and extreme cold-weather mission sets is slated to begin in the fourth quarter of fiscal year 2023 with the U.S. Army Northern Warfare Training Center, Fort Wainwright, Alaska, designated as the first unit equipped. The award is a firm-fixed price requirements contract valued at $278 million. The Army intends to purchase 110 vehicles for the active-duty Army and Army National Guard.”

The CATV’s mobility allows it to traverse snow, swamps, bogs, and ford-deep water, thanks in part to a tracked articulated cab being able to tow an also-tracked modular trailer.

“We look forward to the CATV fielding and the increased capabilities it will bring to America’s Arctic Airborne Division,” said Maj. Gen. Brian S. Eifler, the commanding general of the 11th Airborne Division and deputy commander of U.S. Alaskan Command, in the statement.

Though the U.S. Army currently operates a similar vehicle, the Cold War-era cold weather vehicle design is over half a century old and needs a replacement.

“The small unit support vehicles were great in their day, but have needed replacing for the past two decades. These new vehicles will provide our Arctic Angels with capable, reliable mobility and increase their survivability in the harshest conditions Alaska and the Arctic has to offer,” Major General Eifler continued.

Though the vehicles are unarmored and thus do not offer much by way of protection, it helps keep the vehicle’s curb weight down and greatly aids overland mobility. As an agile high-endurance troop transport, the CATV excels.

The 11th Airborne Division had relied on eight-wheeled Strykers but the vehicles proved to be poorly adapted to cold water operations and often struggled in below-freezing temperatures.

“Our product management team for Multi-mission Protected Vehicles undertook a great challenge to quickly develop and execute a strategy using all the authorities and tools available to streamline and accelerate the CATV acquisition process,” Brigadier General Peterson continued.

The U.S. Army statement explained that the vehicles are expected to enter service in 2023.