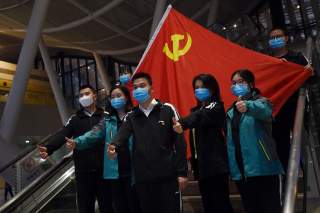 The pandemic of the coronavirus that has been pushing healthcare systems in the western world to their breaking point originated in the Wuhan province of China last fall. The medical consensus is that the virus was created in the bushmeat markets, where exotic animals are kept in filthy conditions and bacteria come into regular contact with people.

Over four months since the coronavirus began in China, the National Health Commission has announced for the second time that there are no new local cases in the country. Thirty-nine cases were added to the national total, although these were labeled “new imported confirmed cases.” The perception remains that the East has come through the worst of the pandemic, and the epicenter of the disease is now Europe.

The official number reported by the Chinese government is that they had 80,967 positive cases at their height. Their official number of dead is 3,248, three of which died yesterday.

Italy, particularly its northern region has been the European country hardest hit by the virus. They have only 7,021 positive cases, but a corresponding death toll of 4,032, higher than China’s. The Italians have had 627 coronavirus-related deaths in just the past twenty-four hours.

The United States is in the best condition of the three, although medical scientists worry that the country is on a similar growth path to Italy’s. As of this afternoon, positive cases in the U.S. have grown to 15,650, with a relatively slim death toll of 202.

These number disparities between China and the western countries has led to the suspicion among U.S. officials and the public that the country is concealing their real numbers. China is a totalitarian society ruled by the Chinese Communist Party under President Xi Jinping. Their citizens live without political freedom, and the government retains control over all aspects of communication.

Accusations are that the communists organized a mass cover-up to save face, which includes suppressing the seriousness of the disease to the outside world, brutally cracking down on all dissent, and hiding the countless bodies of people who died from the virus, all for the purpose of not embarrassing the ruling regime.

“If the officials had disclosed information about the epidemic earlier, I think it would have been a lot better. There should be more openness and transparency,” said Dr. Li Wenliang to the New York Times. Li was a doctor working in Wuhan, who in December warned his medical colleagues across the rest of China about the seriousness of the disease and how they were not receiving the full picture. In early January Dr. Li was arrested by Chinese authorities and made to sign a statement that his actions constituted a threat to national security and that he had lied. He died of coronavirus in early February.

The Chinese Foreign Ministry is now blaming the U.S. military for creating the coronavirus and bringing it to Wuhan. There is no evidence to support this.

Image: Medical workers from outside Wuhan pose for pictures with a Chinese Communist Party flag at the Wuhan Railway Station before leaving the epicentre of the novel coronavirus disease (COVID-19) outbreak, in Hubei province, China March 17, 2020. Picture taken March 17, 2020. REUTERS/Stringer CHINA OUT.