Are Hezbollah’s Attack Tunnels the Future of Warfare? 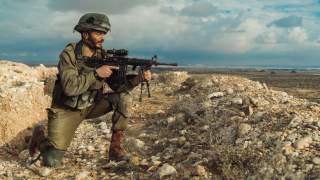 But now Israel faces a new threat that doesn’t go through Israeli defenses, but under them.

Hezbollah, the Lebanese Shia militant group, has dug tunnels under the border between Lebanon and the Galilee region of northern Israel. Israel says the tunnels have a deadly purpose: to allow Hezbollah fighters to enter Israel in a surprise attack to capture Israeli border communities, a feat that Arab armies have not been able to accomplish since 1948.

“The plan entails fighters from Hezbollah's elite Radwan unit infiltrating Israel from Lebanon, entrenching themselves in Israeli communities near the border while taking hostages and using Israeli citizens as human shields,” according to Israel’s Ynet News. The tunnels were sophisticated, with electricity and ventilation systems.

This is not the first time that Israel has faced tunnels. Hamas tunneled from Gaza into southern Israel, most famously emerging to capture Israeli soldier Gilad Shalit in 2006, who was held captive for five years until exchanged for Hamas prisoners in 2011. This has spurred the Israel Defense Forces to develop new technology and techniques for detecting tunnels.

The work seems to have paid off. Last month, Israeli troops began destroying the Hezbollah tunnels. So far, Israel has destroyed five tunnels, though given the nature of subterranean warfare, there may very well be more.

Which raises the question: Are Hezbollah’s tunnels a template for the future of warfare? It’s not that tunnels are a new weapon. The Viet Cong used them to hide from and ambush American soldiers, while North Korea is famous for building numerous tunnels under the DMZ as invasion routes into South Korea, with some wide enough for tanks to cross.

Hezbollah cannot be under any illusions that it could hold the Galilee against Israeli firepower (though such firepower would kill Israeli hostages). Hezbollah “conquering” the Galilee would not be conquest in the conventional sense. It would be more like terrorists or bank robbers taking hostages.

But if Israel’s estimation is correct, then permanent conquest doesn’t matter. Hezbollah would use these tunnels to capture enemy territory in a surprise attack, to seize territory, humiliate the enemy and demonstrate their impotence before the world. Hezbollah has always displayed a keen sense of public relations, like almost destroying an Israeli warship with a missile on live television. Capturing a few Israeli towns would be even more impressive, reminiscent of the Tet Offensive, which sought to demonstrate the powerlessness of the Saigon government and its American backers by mounting a nationwide offensive across South Vietnam.

So is Hezbollah’s tunnel strategy the future of warfare? It could be—if certain conditions are met. For starters, you would need a non-state organization that’s actually more powerful than the army of the state it resides in (such as Lebanon.) That actor would be so powerful because of generous military and financial assistance from a foreign nation (such as Iran), including access to advanced weapons such as ballistic missiles.

That organization would also need to control a border territory (such as southern Lebanon), so that it would be free to build tunnels with minimal interference from a cowed central government or UN peacekeepers too weak and timid to interfere. It would also help to face an enemy such as Israel, which is sensitive to losing the lives of its citizens. If these conditions exist, then any guerrilla or militia organization could do what Hezbollah does. The problem is finding places where these conditions apply. Syria or Yemen are not conflicts where the lives of hostages seem to matter much. Muslim rebels in the Philippines don’t have ballistic missiles. The Iraqi government wouldn’t give political cover to ISIS if it dug attack tunnels into Iran.

In other words, Hezbollah’s tunnels are a clever idea because of the unique conditions along the Israel-Lebanon border. Which doesn’t mean they would work anywhere else.