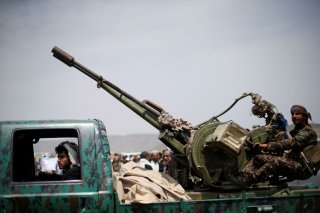 On January 17, Iranian-backed Houthi rebels claimed responsibility for aerial attacks that killed three civilians and injured six others in Abu Dhabi earlier this week. The missile and drone attacks detonated three separate petroleum tankers in a construction site near the Abu Dhabi International Airport, according to UAE police. Although the Houthi rebels consistently launch terror attacks targeting civilian infrastructure in Saudi Arabia, this attack is the most significant strike by the Iran-backed group in the UAE and the first in nearly four years. Additionally, these aerial attacks followed a series of rocket bombardments in Iraq and Syria, also carried out by Iranian-backed proxies. While these regionwide attacks can be linked to Iran, the motivations driving them vary.

Throughout January, Tehran has been commemorating the death of its former Islamic Revolutionary Guard Corps commander Gen. Qassim Soleimani, who was assassinated in a U.S.-led drone strike in early 2020. This year, Iran’s leadership has vowed to avenge his death and directly threatened the U.S. personnel involved in his targeted killing. In a video circulated by the Middle East Media Research Institute, Ebrahim Raisi, Iran’s current president and the head its judiciary, threatened those involved in Soleimani’s death would “not be safe anywhere on the globe,” adding that “the steel willpower of the resistance movement will exact hard revenge from them.” Other regime officials mirrored Raisi’s rhetoric and sanctioned fifty-two Americans earlier this month, including chairman of the Joint Chiefs of Staff General Mark Milley and former White House national security adviser Robert O’Brien.

More concerning, these threats were coupled with a series of rocket attacks targeting U.S. personnel in Iraq and Syria. A few days after commemorating the death of Soleimani on January 3, U.S. troops in Baghdad and the western Anbar province were hit by coordinated Katyusha rockets while eight rounds of indirect fire bombarded a base hosting U.S. troops in Syria. One week later, the U.S. Embassy in Iraq’s fortified Green Zone reported that the compound was “attacked by terrorists attempting to undermine Iraq’s security, sovereignty and international relations.”

Tehran has pledged to remove all signs of the U.S. military presence from Iraq since Soleimani’s killing, regardless of the consequences for the country, including the resurgence of the Islamic State and loss of sovereignty. While the regime is using the second anniversary of Soleimani’s death as justification for recent escalations in Iraq and Syria, their perceived empowerment cannot be dismissed. Iran believes its control in Iraq is so pervasive and dominant that its proxies attempted an assassination attack on the residence of Prime Minister Mustafa al-Kadhimi in November 2021.

While Iranian proxies have launched more sophisticated and lethal weaponry in Iraq and Syria, the Houthi rebels have been able to escalate the devastating eight-year war in Yemen using the same advanced ammunition. In the last year, the Houthis seized the compound that used to serve as the U.S. Embassy and detained twenty-five employees for days, captured an Emirati-flagged vessel, illegally arrested two UN staff members, and launched various terror attacks targeting civilians in Saudi Arabia and Yemen. The rebels’ former status as a U.S. designated terror organization was revoked by the Biden administration last February, yet their actions show the “terrorist” title fits.

Iran’s regionwide directed attacks indicate an empowered regime, and Tehran’s threats toward U.S. officials involved in Soleimani’s killing may not be purely symbolic. The regime’s escalatory behavior abroad is perhaps also intended to distract its constituents’ growing displeasure with domestic turmoil on the ground. Since last summer, a wave of labor strikes has swept Iran. Protestors are demanding higher wages as Tehran’s economy continues to plunge, and regime officials are starting to feel the heat. Additionally, Iranian militias lost more than half of their parliamentary seats in Iraq’s October 2021 elections, demonstrating the groups’ waning popularity in the country.

Tehran’s influence at home and abroad is faltering and its cooperation with aligned militias has, for the most part, continued unchecked. In order to display a mirage of stability and strength, regime officials will likely lean even more on their proxy apparatus in the upcoming months.