Are the Plans for an Indian-Russian Stealth Fighter Dead on Arrival? 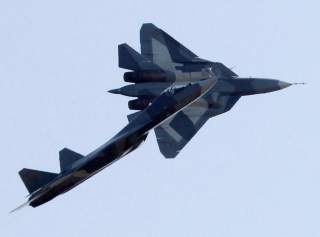 The countries have signed only a preliminary $295 million design contract for the co-development of the FGFA/PMF in 2010 since the start of the joint project in 2007.

As reported by Franz-Stefan Gady in an extensive piece for The Diplomat, India and Russia continue to struggle in moving forward with the co-development and production of the the Sukhoi/HAL Fifth Generation Fighter Aircraft (FGFA), known in India as the Perspective Multirole Fighter (PMF), which actually is is a derivative project of the Russian Sukhoi T-50 stealth fighter.

In fact according to Defense News, a senior Indian Air Force (IAF) official recently revealed that since the work-sharing agreement currently under negotiation includes the transfer of sensitive Russian defense technology, Moscow is demanding $7 billion from India as part of its share in the development of the fighter jet.

“India is not in a position to pay this kind of money, and the aircraft project appears to be lost,” he said. In May Indian officials said that the deal would not include tech transfers. A claim confirmed also by an Indian Government official, who added that the two countries “are co-developers. There is nothing called technology transfer in this project.”

As Franz-Stefan Gady explained in March, technology transfer from Russia to India has been one of the main issues between the two sides right from the start of the project. “Before moving on, India wants a guarantee that it will be able to upgrade the fighter jet in the future without Russian support, which would require Moscow sharing source codes (sensitive computer code that controls the fighter jet’s various systems — the key to an aircraft’s electronic brains). In addition, the FGFA should directly support India’s advanced medium combat aircraft (AMCA) program — a separate Indian fifth generation fighterproject,” he said.

The countries have signed only a preliminary $295 million design contract for the co-development of the FGFA/PMF in 2010 since the start of the joint project in 2007. Again Franz-Stefan Gady reported that “Delays were caused by New Delhi and Moscow disagreeing over many fundamental aspects of the joint development project including work and cost share, aircraft technology, as well as the number of aircraft to be ordered. After evaluating the first PAK FA T-50 prototype (the Russian prototype of the PMF), the Indian Air Force (IAF) wanted more than 40 changes addressing, among other things, perceived weaknesses in the plane’s engine, stealth, and weapon-carrying capabilities.”

According to Franz-Stefan Gady, India and Russia disagreed also about the number of aircraft to be produced since “Russia announced in late 2015 that it would only induct a squadron (18-24 aircraft) of PAK FA fighter aircraft, and procure additional Sukhoi Su-35aircraft instead. The original deal involved Russia procuring 250 and India 144 aircraft at a cost of around $30 billion by 2022. As a result, India threatened to abandon the project in its entirety. Russia in turn made a number of concessions, including an offer to cut down its financial contribution from $6 to $3.7 billion for three PAK FA T-50 prototypes and substantial technology transfers.”

The Russian Air and Space Force (RuASF) will induct the first T-50 stealth fighters in service in 2018.