Are Putin’s Advisers Lying to Him About the War in Ukraine? 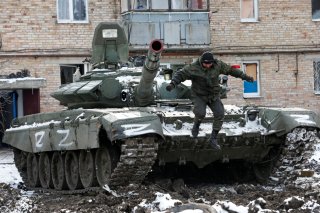 Russian leader Vladimir Putin has “felt misled” by his advisers over Russia’s ongoing invasion of Ukraine, prompting “persistent tension” between him and the military, according to the Biden administration.

White House communications director Kate Bedingfield claimed on Wednesday that Putin was being systemically misinformed on the ongoing conduct of the war by his inner circle because they fear he might attempt to escalate the conflict if he understands Russia’s precarious position in Ukraine.

“We believe that Putin is being misinformed by his advisers about how badly the Russian military is performing and how the Russian economy is being crippled … because his senior advisers are too afraid to tell him the truth,” Bedingfield told reporters at a press briefing.

Bedingfield’s assessment was backed by an anonymous U.S. security official, who claimed that “[even] Putin didn’t know his military was using, and losing, conscripts in Ukraine.” In early March, Putin publicly denied that Russian conscripts had participated in the invasion, insisting that only volunteer units of the country’s army had been involved. However, Russia’s Defense Ministry acknowledged that conscripts were present in Ukraine the following day. The anonymous official argued that the incident “show[ed] a clear breakdown in the flow of information to the Russian president.”

A European diplomat later concurred with the Russian assessment, agreeing that “Putin thought things were going better than they were.”

“That’s the problem with surrounding yourself with ‘yes men’ or only sitting with them at the end of a very long table,” the official said, referencing photos of the Russian leader hosting socially distanced meetings.

Russian officials have insisted throughout the conflict that it continues to achieve its objectives, with Putin himself proclaiming in early March that it was “going to plan.” However, most international observers have highlighted significant Russian setbacks, including the military’s logistical nightmares, loss of much of its heavy equipment and thousands of its soldiers, and ongoing failure to capture major Ukrainian cities, including Kyiv, Kharkiv, and Mariupol.

Before and during the conflict, the Biden administration has made U.S. intelligence reports public, including accurate predictions about when and how the war would begin. These reports helped galvanize public support for Ukraine and discredit Russian claims that the war had been launched to protect pro-Russian civilians in Ukraine’s eastern Donbass region.

As the war enters its sixth week, more than four million Ukrainian civilians, or roughly 10 percent of its pre-war population, have fled the country. Ongoing negotiations between Russian and Ukrainian diplomats in Istanbul, Turkey, have failed to reach a peace agreement.