Are Putin’s Nuclear Threats Working Against the West? 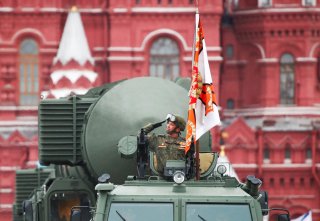 Russian threats to use nuclear weapons are by no means new or surprising at this point, given its previous rhetoric and well-documented tendency to escalate to pressure or intimidate adversaries. However, Russian leader Vladimir Putin’s most recent threat points to a broader question of great significance: is this scare tactic working?

It is important to understand whether Putin’s threatening rhetoric and posturing truly afford Putin a strategic advantage. Certainly, the prospect of nuclear catastrophe and the realities of a potentially unwinnable war are sufficient to cause any country to pause when it comes to the question of escalation. However, Russia has a long history of using these kinds of tactics to essentially hold the world hostage. Could these threats purely be manipulation to compensate for what appears to be military inferiority?

However realistic the threat—and it is being taken quite seriously by the United States—the mere possibility of nuclear war is a key reason why NATO is being extremely careful to avoid escalation. This concern is likely a large reason why there was never a decision to establish a no-fly zone over Ukraine. Are these fears also why longer-range missiles able to reach Russia are not being sent to Ukraine by the United States? It would make sense if this was the reason behind Washington’s hesitancy to supply longer-range capabilities, as the consequences of nuclear war are so immense that, however small the risk, it is not one worth taking. Should this be the case, then it suggests that Russia’s “escalate to win” manipulation is arguably having some success. Still, this escalation raises the question of whether Putin would actually use nuclear weapons. Observers have for years made the point that Putin appears to be somewhat of a rational actor and is therefore not inclined to make decisions that could bring destruction to Russia. Certainly, Putin has to realize that the use of nuclear weapons would most likely lead to his own elimination.

Do NATO and the West call the bluff and take the risk of supporting Ukraine even more? It is a delicate balance that the Pentagon seems to be handling well, given that the military and the Biden administration are being careful to avoid escalation in terms of rhetoric, even going so far as to pause intercontinental ballistic missile tests. At the same time, the Pentagon continues to express great confidence in the readiness and ability of its nuclear triad, arsenal of nuclear weapons, and strategic deterrence posture.

Moreover, Pentagon press secretary Brig. Gen. Pat Ryder recently told reporters that “[Russia’s threats do] not affect the department's commitment to continue working closely with our international partners and our allies on providing Ukraine with the support that it needs in their fight to defend their country.”