Are Russian Forces in Ukraine Being Led From Moscow? 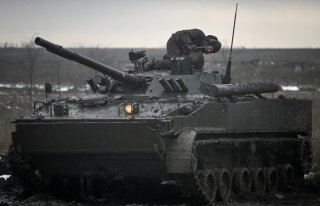 U.S. military experts observing the war in Ukraine believe that the invading Russian forces lack a central war commander in the country, leading them to rely on government officials in Moscow for orders, according to the New York Times.

If true, this centralized approach to decision-making—a hallmark of Russian strategy in Ukraine that has significantly hindered the invading force—could help explain why the Russian military has failed to make any significant strategic gains in the country after a month of fighting. Although the tenacious resistance of the Ukrainian armed forces has surprised many observers in Russia and the West, U.S. experts have also highlighted the role of Russia’s logistical difficulties and its seeming inability to conduct combined arms operations between sea, air, and land units in its battlefield setbacks.

These failures have been costly for the Russian military, which has lost 40,000 killed, injured, or captured troops, according to a NATO estimate. Moreover, the Russian military has lost at least seven Russian generals—an unthinkably high number for the United States, which lost one general in Afghanistan and none in Iraq during its twenty-year military mission in the two countries. Observers in the United States and elsewhere have speculated that a lack of initiative or clear instructions among Russian mid-level officers leads generals to forward positions in attempts to solve problems, exposing them to enemy fire.

U.S. military experts also told the Times that no clear Russian commander had emerged in Ukraine, leading the United States and NATO to believe that day-to-day decision-making in the war was being made by high-level officials in Moscow, including Defense Minister Sergei Shoigu and Chief of the General Staff Valery Gerasimov. However, the experts warned that these officials could not fully understand the realities on the ground in Ukraine from Moscow, which is 500 miles east of the fighting.

Earlier in the week, Biden administration officials announced that they believed Putin was receiving incomplete or misleading information from his generals on the conduct of the war, adding that the Russian leader has felt increasingly frustrated by members of his inner circle, including Shoigu, who he believes have failed to tell him the truth about the situation in Ukraine. The Kremlin denied the White House report on Thursday, describing it as a “complete misunderstanding” of Putin’s relationship with his subordinates.

Although Russia has in recent days suggested that it would scale back the invasion and withdraw troops from northern and southern Ukraine to focus on the country’s east, it has also sought to reinforce the initial invasion forces with mercenaries from outside Russia, including as many as 40,000 Syrian nationals.

Moscow has also reportedly hired mercenaries from the Wagner Group, a private Russian military company closely linked to the Kremlin, to supplement its conscript-based army.