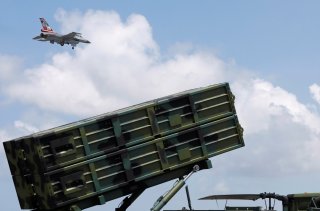 The Global Times reported that a Y-12 light twin-engine aircraft flew near the island on Feb. 5. The development raises questions about how vulnerable Taiwan might be to a Chinese air attack.

Perhaps, but there are still questions about how many missiles Taiwan fields and how much territory they can defend. Taiwan operates domestically-engineered Sky Bow III Tien Kung surface-to-air missile systems built by the Taiwan-based National Chung-Shan Institute of Science and Technology. The weapons have an ability to track and intercept ballistic missiles, fighter jets and other airborne threats out to ranges of approximately 200 km, according to Army-Technology.com.

The Sky Bow is engineered with an active radar guidance system, internal midcourse guidance, and a microwave seeker in the nose of the missile for accuracy.

The Skybow has “four tail fins and is vertically launched. A directional warhead with high-energy fragments enables the missile to destroy targets with high single-shot probability of kill. The missile launcher has four containers, which support both TK III and TK II missiles,” Army-Technology.com says.

The weapons are in the process of being integrated into fixed locations around Taiwan.