Are The U.S. Marines Destined to Lose the Next Big War? 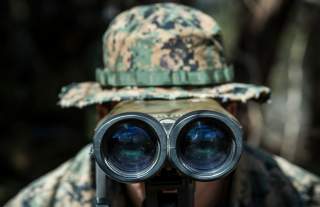 Key point: The Marines are shifting investment from expensive legacy platforms to large numbers of cheap, small, expendable systems enabling naval forces to operate effectively inside a contested zone even if they absorb substantial losses.

Many defense experts believe that defense spending has peaked and may decline in future years. This will intensify the longstanding competition for finite resources among the U.S. military services. In that climate, it will be more important than ever for the U.S. Marine Corps to understand and explain its unique contributions to national security.

As long as there is a requirement to fight on land, at sea, and in the air, the answer for the Army, Navy, and Air Force, respectively, is fairly straightforward. The case of the Marine Corps is more complicated because of the hybrid nature of the service: it is a naval force with its own air assets, capable of fighting on land.

The Marines have answered the question regarding its function in different ways as geopolitical circumstances have changed. During World War II, the Fleet Marine Force operated closely with the Navy, specializing in the conduct of amphibious assaults against defended beaches in order to seize advanced naval bases.

During the Cold War, the Marine Corps reinvented itself as an expeditionary force in readiness, able to respond quickly to emergencies around the globe, but it also served as a second land army in Vietnam – a role it reprised in Afghanistan and Iraq. Marine Corps flexibility has drawn both praise and a periodic identity crisis—with some periodically calling into question whether the U.S. needs a Marine Corps.

The Marine Corps is clearly at a crossroads, a point acknowledged by the new commandant, Gen. David Berger, in his recently-issued planning guidance. While issuing a new “vision” is standard procedure for new service chiefs, the Marine Corps document has caused quite a stir, as it outlines a radical new approach for the service.

Berger acknowledges that the Marine Corps is not organized, trained, equipped, or postured to meet the demands of great power competition. Accordingly, his planning guidance brings the Marine Corps into alignment with the 2018 National Defense Strategy, laying out an audacious plan to reorient the Corps and design a force to meet those demands.

The commandant's planning guidance features three major changes: a focus on China and the Indo-Pacific, a return to the Corps' naval roots, and a willingness to radically change force structure and acquisition priorities.

Berger states that the Marines will concentrate on China as the “pacing threat.” For some time, China has been pursuing an Anti-Access/Area Denial (A2/AD) strategy that features the deployment of a layered cruise and ballistic missile system that threatens U.S. and allied forces operating in the Western Pacific. The Marines will counter China’s A2/AD strategy in an asymmetric fashion, focusing on the “first island chain,” in conjunction with other U.S. forces and allies.

By defending key maritime terrain using widely dispersed forces, capable of engaging ships and aircraft at great distance, Marines could make large swathes of the Pacific Ocean off limits to China’s navy. But operating within the range of enemy precision fires requires many new capabilities, including high-endurance loitering sensors and  munitions and advanced air defense systems.

Berger also intends for the Marine Corps to return to its naval roots. The Marines will be naval not only in character but also in purpose, focusing on achieving and maintaining sea control in contested littorals in order to protect U.S. interests and those of our allies and partners. The Marine Corps of today and tomorrow is “a fleet marine force that could go ashore, instead of a land force that could go on a ship.” This is a return to the model that prevailed during the Pacific campaign of World War II as the Marines were tasked with the seizure of advanced naval bases.

Berger’s intent to reintegrate Marine and Navy forces is also part of a larger “counter-revolution in maritime affairs," returning naval forces to their historical role of defeating an adversary at sea and in contested spaces rather than simply maintaining freedom of navigation on the global commons. Berger sees the Marines as an extension of the fleet, asking, "what can Marines do to help the fleet commander fight his fleet?"

Finally, since the Marines will fight as a dispersed maritime force, Berger has indicated that he plans to shift investment from expensive legacy platforms to large numbers of cheap, small, expendable systems enabling naval forces – Navy and Marine – to operate effectively inside a contested zone even if they absorb substantial losses.

Berger has identified a comprehensive vision of what the Marine Corps will do in the future, established a set of priorities, and outlined a strategy to execute his vision. Of course, implementing this vision will be the real challenge. He will have to confront shrinking resources and entrenched political, business, and bureaucratic interests. But—for the sake of our nation and of the Marine Corps—confront such obstacles he must.

Mackubin Thomas Owens is a research fellow at the Foundation for Defense of Democracies (FDD), where he contributes to FDD’s Center for Military and Political Power (CMPP), focusing on Indo-Pacific military and naval affairs. A former Naval War College professor, he is also the editor of the journal Orbis.

This article first appeared at Real Clear Defense in 2019 and was first published last year.