Are We Really Trying to Decouple From China? 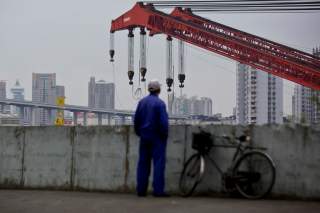 Let’s assume the critics of the US-China trade conflict are correct. Let’s assume the research backs up their pessimism. For example: A recent Federal Reserve study found “U.S. manufacturing industries more exposed to tariff increases experience relative reductions in employment,” as the “positive effect from import protection” was more than offset by “larger negative effects from rising input costs and retaliatory tariffs.” (I also wrote about this research in a recent The Week column.) The tariffs seem to have hurt, not helped, American manufacturing. Even the Trump White House concedes not all has gone according to plan.

Perhaps, however, that economic pain is an acceptable short-term price to pay to achieve an important long-term goal: the decoupling of the American and Chinese economies. It’s certainly an argument I’m hearing from some supporters of President Trump’s protectionist policies. And there’s some evidence that global supply chains are shifting a bit, a phenomenon observed both anecdotally and in trade statistics, such as rising exports from Vietnam to the United States. So trust the process, they say.

But some questions: For starters, is decoupling Chimerica really a serious US policy goal? The recent “phase” one trade deal, which actually increases economic interdependence between the two nations, suggests not. Decoupling isn’t even something Trump really talks much about, other than occasionally nudging American companies, especially, to make their products domestically to avoid tariffs. At least that happens on even days. On odd days, the president mulls over whether to exempt Apple from tariffs.

It’s equally unclear whether proponents of decoupling look at it as a national security issue or an economic issue. If it’s the latter, then how does decoupling of the sort where (some) supply chains merely shift elsewhere in Asia boost American jobs? And either way, China is almost certain to remain a major manufacturing hub. Given its massive size and long-developed capabilities, “the reordering of supply chains is likely to leave China with a diminished but still significant share of the pies,” concludes The Wall Street Journal.

None of this seems particularly well considered, particularly when it comes to costs and the impact on American living standards. Could the smartphone supply chain be shifted to America? Goldman Sachs thinks it probably could, but manufacturing costs would rise by 40 percent. So bring on the robots. And how about apparel? Goldman: “Higher wages and the lack of available labor are essentially insurmountable barriers to any re-shoring of US apparel manufacturing.” Decoupling, especially given its potential role in altering the calculus for military conflict, is a policy stance in need of deeper thought and reflection than it appears to be getting.

This article by James Pethokoukis first appeared at AEI on January 27, 2020.