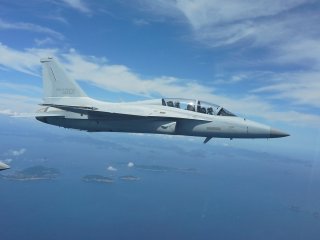 Here's What You Need To Remember: In the context of the Argentine military’s long unilateral disarmament, acquiring 10 new FA-50s and five old Super Etendards is a big deal. Even with these new and used planes, the Argentine air force and navy still would be woefully under-equipped.

The Argentine air force has selected South Korea’s FA-50 as its next fighter, Jane’s reported on July 21, 2019.

The decision is good news for a once-proud air arm that, in recent years, has precipitously declined in size and effectiveness.

A source told Jane’s said he expected the government to sign off on the procurement "in the near future." “Argentina has national presidential elections at the end of October, and the source noted that these may slightly prolong the timeline, but that he still expects the deal to go through,” Jane’s added.

The Argentine air force badly needs new warplanes. British forces in 1982 shot down around a third of Argentina’s 400 warplanes, but in subsequent decades funding woes and mismanagement exacted an even greater toll.

The FA-50s would help the air force to begin rebuilding. The navy meanwhile has begun its own rearmament program. Five ex-French navy Super Etendard fighters in May 2019 arrived at the port of Bahia Blanca in Argentina.

The subsonic fighter-bombers eventually will equip a navy squadron and, by the end of 2019, could be the most sophisticated warplanes in the Argentine military. The FA-50s would exceed them in speed, firepower and sophistication.

In the context of the Argentine military’s long unilateral disarmament, acquiring 10 new FA-50s and five old Super Etendards is a big deal. Even with these new and used planes, the Argentine air force and navy still would be woefully under-equipped.

But it’s a start.