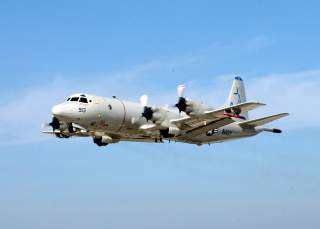 The $78-million acquisition, should Buenos Aires follow through on it, would continue the slow regeneration of Argentina’s air power.

The P-3C deal, which the State Department approved in late December 2019, includes the four airframes plus spare engines and all the electronics and support systems the turboprop P-3s require. The U.S. Navy has nearly finished replacing its hundreds of Lockheed Martin-made P-3s with a force of around 120 more-capable P-8 patrol planes.

The used P-3Cs would replace six older P-3Bs in Argentine naval aviation. None of the P-3Bs are operational, the State Department noted.

The situation is similar across the Argentine military. As recently as 2017, the Argentine fleet on paper operated around 40 warships together displacing around 120,000 tons of water. These included three submarines of 1970s- and 1980s-vintage, four 1980s-vintage frigates and nine corvettes dating from the ‘70s, ‘80s and 2000s.

Then in July 2019 the Argentine navy announced it would scrap the frigate Heroina and the corvette Rosales, potentially shrinking the fleet to just a handful of operational warships that increasingly are suitable only for coastal, “brown-water” missions.

Many of the air force and navy’s planes and helicopters are non-operational for a lack of maintenance, crews and money. The troubles began with the 1982 Falklands War. British forces shot down around a third of Argentina’s 400 warplanes, but in subsequent decades funding woes and mismanagement exacted an even greater toll.

By late 2015 Buenos Aires could muster fewer than 250 warplanes including a few Vietnam War-vintage, subsonic A-4s and equally aged, but supersonic, French-made Mirages. Even the planes that could fly lacked modern systems.

The Mirages left service in mid-2015. By 2018 Argentina also had retired all of its A-4s. The flying branch had wanted to upgrade the fighters to serve until 2022, but a lack of spares rendered them unflyable. By 2019 the only fighters in service were around two dozen subsonic IA-63s.

The purchase wasn’t without complications, Scramble reported. “All five were scheduled to be offloaded on May 9, 2019, but this turned out to be impossible due to a strike in the harbor at the multipurpose dock of the company Patagonia Norte, in Ingeniero White.” The delivery finally took place a short time later.

The Argentine navy previously operated 14 Super Etendards, acquiring five of them in time for service during the Falklands War. Argentine Super Etendards firing Exocet anti-ship missiles sank two British vessels, a destroyer and a cargo ship. By late 2017 none of the original Super Etendards were flightworthy, according to Flight’s 2018 survey of world air arms.

With fresh P-3s and Super Etendards and new FA-50s, Argentina slowly is rebuilding a basic air combat capability. This handful of warplanes fall far short of the aerial firepower Buenos Aires possessed in 1982, but they’re a start.