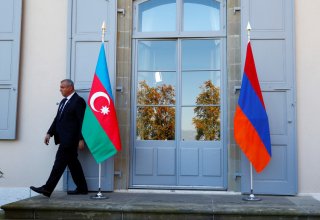 The foreign ministers of Armenia and Azerbaijan met in Switzerland over the weekend for negotiations to formally sign a peace treaty ending the ongoing conflict over the disputed Nagorno-Karabakh region, less than a month after a series of border clashes between the two nations left nearly three hundred people dead.

The two diplomats, Armenian foreign minister Ararat Mirzoyan and Azerbaijani foreign minister Jeyhun Bayramov, held initial discussions on Sunday in Geneva, according to separate press statements issued by each side. Azerbaijan’s foreign ministry claimed that the meeting had been “organized in accordance with the task [of] drafting the text of the peace treaty” as a result of a previous meeting between Armenian prime minister Nikol Pashinyan and Azerbaijani president Ilham Aliyev. “The importance of focusing efforts on the normalization of interstate relations between Azerbaijan and Armenia … in the post-conflict period was emphasized by Minister Bayramov,” the statement continued, claiming that the country’s highest-ranking diplomat had “brought to the attention of the Armenian side the elements of the peace treaty” based on several key principles, including the removal of Armenian troops and landmines from Azerbaijani territory and clarification on the whereabouts of roughly 4,000 Azerbaijanis still missing from the two countries’ most recent war.

“Minister Bayramov once again stressed Azerbaijan’s commitment to ensure peace and stability in the region, and readiness to sign a peace treaty,” the statement concluded. “It was agreed to continue discussions in this regard.”

The Armenian foreign ministry’s statement was shorter but contained many of the same elements, including Mirzoyan’s request that Azerbaijani troops withdraw from Armenian territory and release any remaining Armenian prisoners of war. The statement also called for guarantees for the security of Armenians within captured Azerbaijani territory and the establishment of a direct negotiation mechanism between Azerbaijan and the ethnically Armenian breakaway Republic of Artsakh within Nagorno-Karabakh, which Baku has previously refused to recognize or engage with.

Armenia and Azerbaijan continue to dispute the Nagorno-Karabakh territory, which is internationally recognized as a part of Azerbaijan but is majority-Armenian and was mostly controlled by Artsakh from the early 1990s until 2020. In the fall of 2020, however, Azerbaijan decisively defeated Armenia and Artsakh in the Second Nagorno-Karabakh War, leading to the return of more than half of the disputed territory. Although the two sides agreed to a Russian-mediated ceasefire in November 2020, they have not formally ended the conflict, leading to periodic border skirmishes.