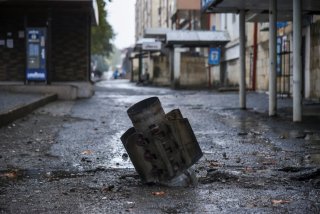 If you hear of the fighting between Armenia and Azerbaijan, it may sound like a peripheral ethnic conflict in which both sides deserve equal blame. You may hear that the violence is sad, but that there’s nothing we can do about it. This is wrong, but it is exactly what the perpetrators want you to think.

Here are ten facts—all verifiable without appealing to Armenian or Azerbaijani sources—about the ongoing conflict over Nagorno-Karabakh.

1) Azerbaijan unilaterally launched a massive attack on the Armenian-populated Republic of Artsakh.

In a September 27 interview, Thomas De Waal, arguably the foremost third-party scholar on the conflict, said “Armenians don’t have an incentive in starting fighting…The side that has an interest in military activity is the Azerbaijani side.”

In the words of the Brookings Institution’s Pavel Baev, Azerbaijan “tim[ed] the offensive to minimize attention” and “has been preparing for a new war, meticulously investing plenty of its petro-revenues into equipping its armed forces with modern weapons.”

2) Azerbaijan has an overwhelming military advantage.

Turkey and Azerbaijan share close linguistic and religious ties. Turkey—a nation of 83 million with a GDP of almost $800 billion—is unambiguously involved in the military operations against Armenia. Since July, Turkey has redoubled its material support for “brother Azerbaijan”—providing drones and transforming Azerbaijan’s “self-confidence,” in the words of retired general Ismail Hakki Pekin. This is an alarming escalation by the state that committed the Armenian Genocide.

4) Azerbaijan is bolstered by thousands of Syrian fighters deployed by Turkey.

At least 1,000 Turkish-deployed Syrian fighters are assisting Azerbaijan, a reality confirmed by sources ranging from CNN to Fox News—along with Reuters, the Guardian, and the Syrian Observatory for Human Rights. Some of the Syrian fighters appear to be linked to ISIS and other jihadist groups, while others are apparently coerced and exploited.

The Armenian city of Stepanakert, far from the front line, is suffering ongoing and indiscriminate artillery bombardment, as reported by Sky News and the BBC. Third-party observers, including Amnesty International, have now confirmed that Azerbaijan is using widely-condemned cluster munitions against civilians.

Azerbaijan claims that Artsakh forfeited its right to complain when its strike on an airbase caused damage in civilian areas. But this single militarily-focused attack, which occurred after Azerbaijan began bombarding Stepanakert, cannot compare to the days-long, indiscriminate destruction Baku has unleashed on Armenian civilians.

6) Artsakh’s population is overwhelmingly Armenian and has been since reliable records were first kept.

According to a 1994 report prepared for the U.S. Army by the Federal Research Division, as of 1924, 94.4 percent of Nagorno-Karabakh’s population was Armenian. Since then, the same report claims, this proportion has never since declined below 76 percent.

7) Artsakh has legitimately expressed its desire for independence.

On December 10, 1991, the people of Artsakh passed a referendum in favor of independence from the Soviet Union, and their leaders officially declared independence on January 6, 1992. This is the same way Azerbaijan itself established independence at the end of 1991.

8) Azerbaijan has a record of killing Armenians under its administration and destroying Armenian heritage within its territory.

Between 1988 and 1990, the Azerbaijani public committed gruesome pogroms against their Armenian neighbors. In the words of a veteran Soviet journalist, “Men, women and children, the young and the old alike, were attacked and often killed because they were Armenians. That alone—to be Armenian in Azerbaijan—was a virtual sentence of death.”

In 2005, the mayor of Baku told a delegation of visiting Germans, “Our goal is the complete elimination of Armenians. You, Nazis, already eliminated the Jews in the 1930s and 40s, right? You should be able to understand us.’’

Also, in 2005, Azerbaijani Army Lieutenant Ramil Safarov used an axe to murder his sleeping Armenian classmate at a training academy in Hungary. Safarov returned to Azerbaijan in 2012, where he was welcomed with a military promotion, adoring crowds, a free apartment, and a special pension.

In 2016, Azerbaijan briefly captured an Armenian-populated village in Artsakh, torturing and executing the elderly residents who remained.

Azerbaijan’s proven record of destruction extends to cultural heritage. In Nakhichevan—a historically Armenian province under Azerbaijani control—authorities have deliberately destroyed thousands of UNESCO-protected Armenian monuments and at least eighty-nine churches. There is little reason to expect that the hundreds of historic Armenian churches and monuments in Artsakh, some of which date to the first millennium, would fare better.

9) The United States has no reason to support Azerbaijan.

Although Armenia is not a member of NATO, Yerevan is the fifth-largest NATO contributor per capita, with its troops still supporting the United States in Afghanistan. Since 2018, Armenia has made internationally-celebrated progress with electoral integrity, rule of law, and eliminating corruption.

Azerbaijan’s lobbyists in Washington, DC portray their employer as a bulwark against Russia and Iran, but Azerbaijan enjoys extensive military cooperation with both countries. Meanwhile, Azerbaijan’s brutally corrupt and authoritarian leaders routinely accuse the United States of supporting terrorism and imperialism.

10) The United States can help end the violence.

The United States possesses special leverage and special responsibility toward the Armenia-Azerbaijan conflict. Along with France and Russia, it serves as a co-chair of the OSCE Minsk Group, the multilateral organization established to mediate the dispute. But observers agree that American disengagement has fueled the current conflict, offering impunity to Azerbaijan.

The United States currently provides Azerbaijan with over $100 million in annual military aid. It also holds important bargaining chips with NATO-member Turkey. By using this influence to demand an end to hostilities, our nation can make a powerful difference.