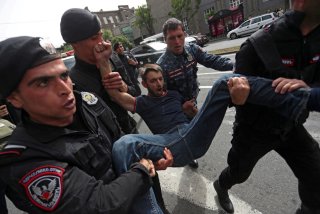 The recent gathering between Pashinyan and Aliyev, however, was rather peculiar. In preparation for their April 6 session, the Azerbaijani government proposed a “new framework” to resolve the Nagorno-Karabakh conflict. The five-point plan calls for the Armenian and Azerbaijani governments to recognize one another’s territorial integrity, abstain from additional threats, demarcate the border, open transportation links, and normalize relations. To date, over 2,000 Russian peacekeepers occupy the Nagorno-Karabakh region to ensure additional skirmishes between Armenia and Azerbaijan do not occur.

In response to the Azerbaijani proposal, Armenian foreign minister Ararat Mirzoyan emphasized the need for negotiations. He then stated that the Nagorno-Karabakh conflict was not a “territorial issue,” but rather, one that was a “matter of rights.”

Pashinyan shared similar sentiments when he met with Aliyev. During their session, Pashinyan stated that the United Nations currently recognized “Karabakh as part of Azerbaijan,” and that the “rights of former Azerbaijani residents … had to be respected.”

Michel, as well as other European officials, served as intermediaries during the session. The meetings between Armenia and Azerbaijan then concluded with both leaders stating that they would pursue a “future peace treaty” in an attempt to finally resolve the issue.

However, these events were not well received in Armenia. Following the conclusion of their recent session, thousands of Armenians gathered in Yerevan to protest the statements made by their government. These citizens warned against making concessions to Azerbaijan, and several Armenians have called for Pashinyan to resign.

Government officials have denied the claims made by these protestors, stating that they have not conceded anything. In contrast, the elected representatives argued that the “status of Nagorno-Karabakh [needs to] be discussed.”

Meanwhile, opposition party leaders within Armenia announced that a “large-scale campaign of civil disobedience” would begin, and that demonstrations should be held throughout the country. As a result, government officials are concerned that there may be future threats of unrest. While hundreds of protestors have been detained, numerous demonstrators continue to gather.

The recent developments in Armenia come at a time of great uncertainty in the Eurasian region. Earlier this year, thousands of Kazakhs gathered to protest their government after it “lifted price caps for liquified petroleum gas.” The decision resulted in a surge in fuel prices, and this led to large demonstrations throughout the country. The protests expanded beyond the dissatisfaction with rising fuel prices, and morphed into a demonstration that highlighted social and economic disparities within Kazakhstan.

While the gatherings were initially peaceful, they eventually turned into violent protests. In response, Kazakh president Kassym-Jomart Tokayev declared a state of emergency, and he requested that the Collective Security Treaty Organization (CSTO) intervene. Led by Russia, units from Armenia, Belarus, Kyrgyzstan, and Tajikistan were deployed to Kazakhstan to put down the protests. Thousands of protestors were arrested, and several hundred were killed. The demonstrations eventually ended, and the CSTO units withdrew.

Now, as Armenian citizens continue to protest their government, Pashinyan will continue to monitor the situation closely. Should the demonstrations turn violent, he may echo Tokayev’s call for CSTO intervention, similar to how he requested Russia’s assistance with the Nagorno-Karabakh conflict. This, in turn, would lead to the deployment of thousands of foreign units to Yerevan to try and put down the demonstrations. Russia may also be forced to intervene in Armenia. While more than 2,000 Russian soldiers occupy Nagorno-Karabakh, it is unlikely that they would abandon their positions in the region for fear that a new skirmish would emerge. As a result, Russia may be forced to divert some of its forces from Ukraine to Armenia, thus disrupting Russian president Vladimir Putin’s ambitions in the region.

This would lead to further disruptions in Armenia. Earlier this year, Armenians did not approve the deployment of CSTO units to Kazakhstan. If Russia and other neighboring states were to send troops to Armenia, this could lead to further violence, bloodshed, and chaos.

Therefore, Armenia’s elected officials must tread lightly as they work to resolve the ongoing Nagorno-Karabakh conflict. Otherwise, if the Armenian government loses the trust of its people, there may be greater instability within Armenia and the region as a whole. With the previous devastation in Kazakhstan, and with the recent destruction caused by Russia in Ukraine, the world will certainly hope that the protests in Armenia will be peacefully resolved. It cannot afford another Eurasian conflict.