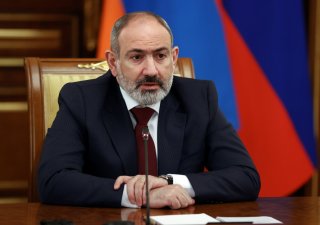 The war in Ukraine is having a profound impact on the post-Soviet region, with far-reaching consequences for the geopolitical fortunes of those involved. One country where Russia still wields significant power is Armenia. Ongoing political protests, as well as the deeper and often unseen political currents in Armenia, deserve to be highlighted to avoid the pitfalls of the past thirty years. The following five points will help outside observers better understand what is happening in Armenia and what is at stake.

Pashinyan and the “Opposition” Support the Kremlin

Prime Minister Nikol Pashinyan is fighting for his political life. He is facing street protests led by his two predecessors, former presidents Robert Kocharyan and Serge Sargsyan. This is no ordinary opposition though. Unpopular among most voters, these leaders have pledged allegiance to Moscow and signaled their readiness to lead Armenia into a union with Russia and Belarus.

Pashinyan is no different. His foreign policy has been strongly pro-Russian. He has backpedaled on his promises to reform the country and improve relations with the West. He also recently signed a thirty-point agreement with Putin, which included a commitment to help Russia evade Western sanctions put in place over the war in Ukraine. Sending troops to Syria alongside Russian forces, voting in favor of Russia-sponsored resolutions in the United Nations (UN), and actively participating in the Russia-led security block are only a shortlist of his pro-Russian policies. His media freedom and judicial reforms have been criticized by independent observers.

Why then would the Kremlin unleash the forces of the parliamentary “opposition” against a loyalist? The answer has to do with President Putin’s broader plans for the region. Having engineered the capitulation of Armenia on November 9, 2020, Putin is rushing to complete his de facto handover of the remainder of Artsakh and parts of sovereign Armenia to Azerbaijan, a country that Russia signed a strategic partnership treaty with two days before its invasion of Ukraine.

However, Pashinyan is also under pressure from the West to refuse Russian-Turkish-Azeri demands. The resulting balancing act by Pashinyan is not to Putin’s liking, who has unleashed the Kosharyan-Sargsyan opposition to keep pressure on Pashinyan to deliver. Once he does, few doubt that Pashinyan will be replaced by someone more reliable from the “opposition” camp.

Despite Armenia’s loss of much of Artsakh following the November 2020 ceasefire, the West insists that the conflict is not resolved and that the final status of Artsakh should be addressed as part of a broader settlement. This runs counter to Putin’s own view, in which the conflict has been fully resolved and Artsakh is part of Azerbaijan. Moreover, he insists that a border demarcation between Armenia and Azerbaijan should take place using Soviet-era maps. These maps, however, run counter to the only internationally-recognized borders between Armenia and Azerbaijan laid out by the League of Nations in February 1920. The subsequent Soviet and Turkish occupation of Armenia was illegal and not internationally recognized, giving Armenia the status of a “captive nation” by the United States. To allow Putin’s demarcation to go forward would legitimize Joseph Stalin’s gerrymandering of borders.

Azerbaijan’s president Ilham Aliyev knows this, which is why he is rushing to solidify the gains he made in November 2020 with the help of Putin while Putin and Pashinyan are still in office. This includes opening a land corridor through Armenia’s southernmost province to connect the Azerbaijani enclave of Nakhchivan with Azerbaijan proper. Aliyev also knows that while Pashinyan is in power, the Armenian army is unlikely to be rebuilt into a force capable of securing the country’s borders against another attack. Aliyev’s own failure to repopulate the territories forcibly taken from Artsakh adds to his anxiety.

Continuing to deny the Armenian Genocide committed by Ottoman Turkey, President Recep Tayyip Erdogan needs Russia to uphold the otherwise illegal Kars and Moscow treaties of 1921 following their joint occupation of Armenia. These treaties de facto nullified the League of Nations’ verdict on the Armenian-Azeri border and the U.S. president Woodrow Wilson’s Arbitral Award for Armenia while allowing Turkey—in partnership with Azerbaijan—to maintain control over much of Armenia as recognized by the international community in 1920. Turkey wants Armenian leaders to recognize the current borders between the two countries as a precondition for establishing diplomatic relations.

At least when it comes to the South Caucasus, Turkey and Russia are “communicating vessels.” Russia’s decline as a result of the war in Ukraine will inevitably result in a decline of Turkey's geopolitical importance to the West. Hence, Erdoğan is in a hurry to sign a Russia-sponsored border agreement with Armenia’s pro-Kremlin regime, realizing that a truly sovereign leadership in Armenia will be unlikely to fall for his blackmail.

On the surface, Pashinyan’s pacifist rhetoric towards  Turkey is based on a misguided notion that getting Turkey to open its border will help the impoverished Armenian economy thrive. However, anyone with any knowledge of how the benefits of trade are derived knows that the much weaker and uncompetitive Armenian economy will be overwhelmed by cheaper Turkish imports. Time and concerted efforts are needed to improve economic competitiveness, something Pashinyan is not keen on allowing.

Armenia’s Inevitable Shift Towards the West

Armenia needs to start from a clean slate just as it did in 1988 when its independence movement helped catalyze the dissolution of the Soviet Union. To the man on the street today, Pashinyan is tainted by his ties with Moscow and, more significantly, by his direct role in the November 2020  capitulation; he has to go. While Armenia’s shift to the West has previously been prevented by Russia using the Turkish threat as a deterrent, the war in Ukraine may break this old conundrum.

It also almost happened in 2018, when Putin leveraged the decade-long pro-democracy aspirations of the people of Armenia to usher Pashinyan into power and guarantee Armenia’s place within Russia’s orbit. A similar plan failed in Ukraine. Next time the people of Armenia take to the streets en masse, it will be to bring to power a leader that will restore Armenia’s sovereignty and reclaim its place in the family of Western nations. This will also be key to pushing Russia out of the Caucasus and curtailing Turkey’s neo-Ottoman ambitions. Luckily, the West’s own geopolitical interests appear to align with this.

Ara Papian is Armenia’s former Ambassador to Canada and a governing board member of the National-Democratic Alliance, a pro-Western political movement in Armenia that advocates for a Major Non-NATO US Ally status for Armenia.