Is This Armored Vehicle Really the Future of the U.S. Army? 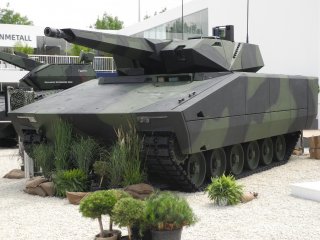 Known for their firepower expertise as the producer of the 120 mm smoothbore gun technology used in the well-known Leopard 2 and M1 Abrams Main Battle Tanks (MBT), as well as their work on the Puma Infantry Fighting Vehicle (IFV), Germany-based Rheinmetall is supporting their U.S. vehicle team. Sterling Heights, Michigan-based American Rheinmetall Vehicles leads an integrated team of U.S. weapon systems developers to engineer a new infantry fighting vehicle tailored specifically to U.S. Army requirements for the now underway OMFV competition. The American Rheinmetall Vehicles (ARV)-led team includes Raytheon Technologies, Textron Systems, L3Harris Technologies, and Allison Transmission. As part of the Lynx team, each of these contributors is tasked with bringing expertise in key areas and leveraging their capabilities in advanced technology and innovation. Some of these approaches include the use of modular and open architecture, systems integration, and advanced U.S. development and production of armored vehicles and supporting technologies.

“The advanced technologies and capabilities found in the existing Rheinmetall Lynx KF41 Infantry Fighting Vehicle are merely a starting point from which the team will design and deliver a truly exceptional OMFV solution to the U.S. warfighter,” said Mike Milner, Director of Business Development and Strategy for American Rheinmetall Vehicles. “We are establishing a modern manufacturing base in the United States to develop and produce an exceptional American- made vehicle,” Milner told The National Interest.

Essentially, the U.S. Lynx OMFV variant is intended to be a substantially new vehicle with the ability to rapidly adapt as modern and contemporary threats emerge and evolve. While each team member will of course contribute across the spectrum of technological development and integration, particular contributions will obviously draw upon each team member’s well-known strengths, like Textron Systems’ armored vehicle and robotic expertise, L3Harris’ sensing and mission systems capability, Raytheon’s weapons, computing, sensing, and drone integration history and of course Allison transmissions propulsion technologies featured on numerous U.S. combat vehicle platforms. “With these contributions and the foundational existing Lynx KF41 as a starting point,” Milner said, “the U.S. variant emerges.”

“Though the state-of-the-art Lynx is in production today, the vehicle we deliver for the OMFV competition, and even the initial concept, will be a different vehicle than the Lynx you see in other NATO partner nations and Australia because our team is laser-focused on meeting the U.S. Army’s specific requirements,” he added.