The Army’s Future Will Be Built on AI and Robots 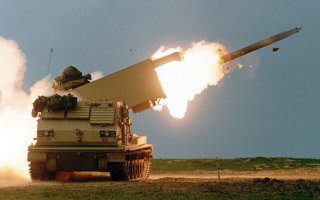 The future of armored conflict and modern conceptions of Combined Arms Maneuver is unfolding, and major weapons builders are trying to anticipate future Army needs and requirements. They are investing in research and innovation to help discover new technologies and weapons. In a strategic and developmental sense, General Dynamics Land Systems (GDLS) is seeking to align with, anticipate, and support the Army’s modernization strategy and vision, something which senior leaders say relies heavily upon continued innovation, experimentation, and the rapid harvesting of technologies. GDLS’s focus on innovation, development, and experimentation aligns with what Under Secretary of the Army, Gabe Camarillo told The National Interest in an interview.

“I think what we need to focus on at this point is continued experimentation, continued assessment of where the state of technology might be. And then I think we need to think through as we design, you know, look ahead beyond the Army of 2030,” Camarillo said. “How can we incorporate those technologies and those capabilities into the formations of the future, to enable us to be prepared to do what we’ve always done, which is to dominate the battlefield?”

The idea, Camarillo said, is not only to find or uncover new technologies but to “transition” them such that they quickly support the war effort. This kind of sensibility, wherein new paradigm-changing technologies are integrated into both existing and new platforms, is what GDLS strives to align with.

As part of this effort, GDLS is working with the Army to build AI into its new generation of Robotic Combat Vehicles to process data, organize incoming sensor information from otherwise disparate pools of information, and distribute crucial targeting information across the force in real-time.

The Army has identified the growing technological synergy as the “Warfighter-Machine interface,” meaning machines can leverage procedural speed to distill, organize, analyze, and then transmit crucial data of great significance to human decision-makers pressed to make fast decisions under enemy fire.