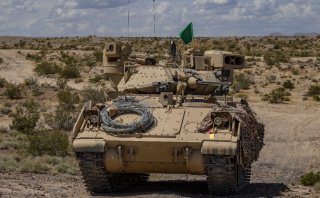 It looks like a light tank, and people may call it the “light tank,” as it is thought of as an expeditionary, lighter-weight armored vehicle to support advancing infantry in combat. While it is more than thirty tons lighter than an Abrams tank, the Army’s new Mobile Protected Firepower vehicle, or MPF, does visually resemble what many would call a “light tank.”

However, the U.S. Army does not like to call its new MPF a “light tank,” as it is built to meet an entirely different set of requirements.

An Abrams is a massive combat platform capable of supporting advancing armored units, breaking through a perimeter to close with an enemy, and unleashing devastating firepower in mechanized warfare. It is a combat-tested and highly cherished platform that continues to be upgraded for future decades. One senior Army weapons developer talked about the lasting importance of having heavy armor available, saying, “We may keep the Abrams forever.”

The new MPF, which will be produced by General Dynamics Land Systems, fires a smaller 105mm cannon, is much faster than an Abrams, and, perhaps most notably, air deployable aboard a C-17. Moreover, its basic concept of operation is also entirely different from an Abrams. The purpose of the MPF is to give infantry armored fire support as they advance quickly in dismounted formations across bridges, enter urban areas, and pass through uneven terrain while attacking an enemy. This kind of lighter, faster, and more deployable armored support introduces tactical possibilities not previously available, as Abrams tanks are much slower, less mobile, and harder to deploy.

Douglas Bush, assistant secretary of the Army for acquisition, logistics, and technology, said the Army is preparing to launch its first MPF unit by 2025, with the first low-rate initial production vehicles slated to arrive in nineteen months.

Interestingly, the vendor now building the new vehicle completely agrees with the Army that the vehicle is in no way a “light tank.” General Dynamics Land Systems, the maker of the Abrams tank, is certainly in a position to know how its new MPF might differ from its heavier counterpart.

“While informed by our experience of building a number of innovative ground combat vehicles, the MPF was designed from the ground up as a completely new vehicle,”  Kevin Bonner, global chief technology officer for General Dynamics Land Systems, told the National Interest in a statement  “From the suspension to the propulsion and electronics, the MPF represents the U.S. Army’s next generation of combat vehicles,” Bonner added.