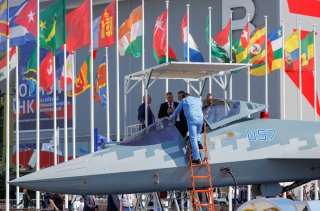 Russia has launched its ARMY-2022 forum, an annual convention intended to showcase the latest in Russian military technology to foreign buyers and Kremlin officials.

The exhibition’s 2022 installment is being held in its traditional venue at the Patriot Center in the broader Moscow region from August 15-21. Russian president Vladimir Putin, who delivered the exhibition’s opening speech on Tuesday, said that over “28,000 modern samples of military and dual-use products” were presented by roughly 1,500 Russian manufacturers to delegates from seventy-two countries.

Russian deputy defense minister Alexey Krivoruchko and United Aircraft Corporation (UAC) Vice-President Alexander Bobryshev signed a deal for the delivery of Russian Su-34 bombers on the sidelines of the expo, according to Russian state news. Introduced in 2014, the Su-34 is a twin-engine strike fighter that has seen extensive action over the course of Russia’s invasion of Ukraine.

UAC Yury Slyusar announced on Tuesday at the forum that serial production of new Sukhoi Superjets—developed with domestically-produced components as a way of mitigating the impact of Western sanctions—and MC-2021 airliners are slated to begin in 2024. “Considering the production cycle and speeding up the implementation of import substitution program, including engine, aviation electronics and other systems and components, it is planned to start serial production of the Russified aircraft by 2024. On MC-21 the key task is to start the production of the airliner in the Russian variant in 2024,” he said, according to Russian state news outlet TASS.

Dmitry Shugayev, the head of Russia’s Federal Service for Military-Technical Cooperation, announced at the forum on Tuesday that Moscow has signed an export contract with Turkey for a second regiment of S-400 missile systems. “A corresponding agreement has already been signed. Among other things, it will allow for the production of some components of the [S-400 Triumf] system to be localized,” Shugayev said.

In the realm of new and experimental technologies, Russian manufacturer Intellect Machine unveiled a prototype of a four-legged, dog-like robot wielding an RPG-26 rocket launcher.  Intellect Machine reportedly told Russian media that its “M-81 robotic system” could be configured to perform reconnaissance, resupply, and combat missions. Observers have claimed that the robot, which was clad in a black outfit, bears an uncanny resemblance to the commercial-use Go1 robot dog from Chinese tech company Unitree. A prototype of the Ural “first self-driving military truck” was presented at the forum. The truck boasts a payload capacity of up to five tons and can reportedly travel up to eighty kilometers per hour.

The Russian government awarded over 500 billion rubles, or approximately $8.1 billion, in contracts during the ARMY-2022 forum, according to Krivoruchko. Russia’s armed forces are expected to receive over 3,700 new pieces of equipment as a result of these agreements, Krivoruchko added.