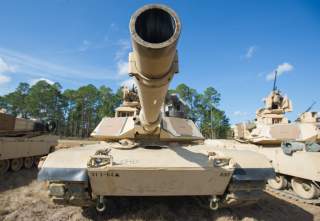 The Army is adding the APS to the venerable Abrams in a bid to increase the aging tanks’ survivability against increasingly capable incoming anti-tank missiles and rocket propelled grenades.

“One bid was solicited with one bid received. Work will be performed in St. Louis, Missouri, with an estimated completion date of March 31, 2020. Fiscal 2018 other procurement (Army); and research, development, test and evaluation funds in the combined amount of $85,843,574 were obligated at the time of the award.”

“Leonardo DRS will provide the U.S. Army with TROPHY active protection systems for its new Abrams tanks,” the company said.

The TROPHY system—developed by Israel’s Rafael Systems—is designed to defeat modern rocket propelled grenades such as the tandem-charge RPG-29 and extremely lethal anti-tank guided missiles such as the Russian Kornet and Chinese HJ-8.

These new anti-tank weapons have rapidly proliferated to current and potential future combat zones and pose a serious threat U.S. forces. Indeed, as the Israeli discovered in 2006 and Turkish forces discovered to their horror in January 2017, the Kornet can easily punch through the armor of both the Merkava IV and the Leopard 2.

TROPHY works by using radar to provide continuous 360-degree protection of the vehicle. Once a threat is detected, the system launches a “tight pattern of explosively formed penetrators” that destroys the incoming round before impact. The system also tracks incoming round back to the shooter, which allows the tank crew to shoot back.

The Israelis have deployed the TROPHY on their Merkava IVs main battle tanks and Namer heavy armored personnel carriers.

“Aboard Merkava tanks, the system has proven 100 percent effective during multiple engagements in and around the Gaza Strip since its fielding, and especially during the Israel Defense Forces’ 2014 Operation Protective Edge,” Leonardo DRS said in its internal SitRep publication.

“In dense, urban terrain and an intense electromagnetic environment, TROPHY successfully defeated attacks by both short-range, tandem RPG-29 rockets and long-range Kornet missiles. No tanks equipped with TROPHY™ suffered hits, casualties or residual effects – nor did any accompanying infantry troops - during any of these engagements.”

Fielding the TROPHY onboard the Abrams is step one to keeping the venerable main battle tank relevant for tomorrows wars.

Longer-term, the Army is developing the Modular Active Protection System (MAPS)—which could be based on TROPHY or it could be some other system. With new precision-guided anti-tank missiles proliferating, the Army needs APS systems for all of its combat vehicles as soon as possible.

“Rockets, artillery, mortars, guided anti-tank weapons, those kinds of things are proliferating…so much that to put our Marines and our soldiers out into that kind of environment without that kind of protection…it is getting to the point where we have to have it,” Lt. Gen. Robert Walsh, chief of Marine Corps Combat Development Command, told SitRep.

The fact is that the penetration power of modern chemical explosive warheads is outpacing passive armor technology—and there is only so much weight a vehicle can carry before it becomes impractical.