The Army and Navy’s Hypersonic Missile is a Go 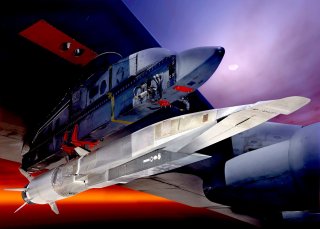 The Army recently released footage of their newest hypersonic missile, the Common Hypersonic Glide Body. The missile, jointly developed with the Navy, is intended to provide a measure of deterrence against adversaries, and to preserve America’s battlefield edge, if necessary.

In the video, the C-HGB is seen prior to launch and during flight. The video, apparently shot at night, also shows the hypersonic missile’s impact after the terminal stage of its flight. The video was actually an amalgamation of two videos, the first part taken from an older video from a previous flight, and the impact portion from the most recent test. This latest test underscores just how important hypersonics are to the United States—and their near-peer rivals.

By definition, hypersonic missiles fly in excess of Mach 5, or five times the speed of sound and are generally designed to be highly maneuverable. Glide bodies like the C-HGB, are unpowered, but reach terminal velocity under rocket power. Once at the proper speed and altitude, glide bodies separate from their rocket boosters and maneuver toward a target, similarly to hypersonic missiles. Thanks to both their blisteringly high speed and the evasive maneuvers they are capable of, defending against them is particularly difficult.

Hypersonic weapons are the next frontier of great power competition between the United States, Russia, and China. The Army and Navy want to expedite the development of the missile and hope to field it in 2023.

Speaking during an online webinar, Lieutenant General Neil Thurgood, director of Hypersonics, Directed Energy, Space, and Rapid Acquisition, said that the missile’s “flight test program is very aggressive, and we need to be aggressive in order to keep on case and be competitive with our near-peer competitors, namely Russia and China.”

Though the Navy is the lead designer for the C-HGB program, the Army is taking the lead in production. Both services will field the same C-HGB, individual launchers and weapon systems will be developed by each branch to address their specific needs. Commonality between the two branches’ Glide Bodies is expected to simplify manufacturing.

In another video of the launch, Lieutenant General Thurgood explained that the missile is quite fast, saying simply, “It gets off the pad pretty quick.” Thrurgood also stated that, “It gets pretty high pretty fast.” It seems America’s hypersonic weapons program is going at a good clip.